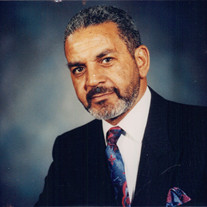 Harold Andrew Ferguson, age 87, passed away peacefully Friday, October 29, 2021.He was born September 17, 1934, in Charlotte, North Carolina to the late Andrew Ferguson and Elizabeth Herbert Martin. Harold is survived by his children; Scott Ferguson, Mark Lewis, Elizabeth Ferguson, Stephen Ferguson, and Samantha Ferguson, grandchildren; Ella, Cohen, Jasmin, and Demarko, brothers; Calvin Ferguson, and Ronald Nelson, a special friend, Retha Jones, and numerous nieces, nephews, and cousins along with many other family and friends. In addition to his parents, he is preceded in death by, his brother, Bobbie Ferguson. He was the first African American to attend St. Charles Preparatory School and he was a graduate of East High School class of 1951. He continued his education at Ohio State University, and then joined the Army. He had a very successful career working in marketing for Seagram's for 20 plus years. When he retired, he continued to work for Upper Arlington Public Library for another 20 years, as well as being a business owner. He was a bright presence in people's lives and will be missed deeply. Family will receive friends Friday, November 5th, 2021, from 5PM-8PM at SCHOEDINGER EAST FUNERAL HOME, 5360 E Livingston Avenue. A funeral service will be held on the following day, Saturday, November 6th, 2021, at 12PM at Trevitt New Life Church, 440 Trevitt Street. Please share a special memory or send condolences to Harold's family.

The family of Harold Ferguson created this Life Tributes page to make it easy to share your memories.

Send flowers to the Ferguson family.