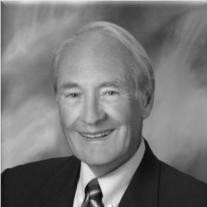 Harley E. Rouda, Sr., real estate icon and founder of HER Realtors, was born on February 25, 1929 and passed away in his central Ohio home in the company of friends and family, June 28, 2012. He served in the U.S. Army during the Korean War. An avid fisherman, tennis player and joke teller, Harley was beloved by all who knew him. Thousands of people had the chance to enjoy a jar of his homemade jam and the famous HER Cookbooks are found in homes throughout central Ohio and beyond. Whether hosting a television show, leading a sales rally or hugging one of his eight grandchildren, Harley’s warmth, loyalty and passion inspired young and old. Harley was recognized nationally and internationally as one of the pioneers and innovators of the real estate industry, and embodied the true entrepreneurial spirit. His company was started in 1956 in the basement of his Upper Arlington home and it quickly grew to become the number one company in the region by 1964. Throughout his career, Harley was honored with dozens of awards including the lifetime achievement award from the Fisher College of Business at Ohio State University; Honorary National President of Habitat International; induction into the Central Ohio Business Hall of Fame; President of the Upper Arlington Civic Association; Ohio Citizen of the Year; Building Industry Association of Central Ohio Outstanding Citizen of the Year; Recipient of the “THE” (The Highest Effort) Award from Sigma Alpha Epsilon Fraternity; Grand Marshall of the Upper Arlington 4th of July Parade; Chairman of the real estate division for United Way; Co-chairman of the Upper Arlington School Bond Levy, which at the time was the first local levy to be passed in 12 years; Member of the Fannie Mae National Advisory Council; Trustee of the Arthur James Cancer Hospital and Research Institute; and established a scholarship fund at Ohio State University. In 1991, he served in the industry’s highest post, chairman of the National Association of Realtors. He also served as president of the Ohio Association and Columbus Board of Realtors. He is survived by his wife of 59 years, Marlese Rouda; children, Greer (Susan) Rouda, Leslie (Brian) Rouda Smith, Scott I. Rouda, and Harley E. (Kaira) Rouda, Jr; grandchildren, Bradley Rouda, Jessi Rouda, Kristin Smith, Austin Smith, Harley E. “Trace” Rouda III, Avery Rouda, Shea Rouda, and Dylan Rouda; brother, Jan Lewis (Janet) Rouda; and many extended family members and dear friends. A celebration of his life and legacy will take place on Monday, July 2, 2012, at Bridgewater Conference Center, 10561 Sawmill Parkway, Powell, Ohio, from 5 to 8 p.m. A short program will begin at 6 p.m. All are welcome. In lieu of flowers, please make a donation to a favorite charity in honor of this wonderful man.

Harley E. Rouda, Sr., real estate icon and founder of HER Realtors, was born on February 25, 1929 and passed away in his central Ohio home in the company of friends and family, June 28, 2012. He served in the U.S. Army during the Korean... View Obituary & Service Information

The family of Harley E. Rouda created this Life Tributes page to make it easy to share your memories.

Send flowers to the Rouda family.