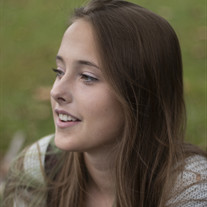 Hannah Adele O'Toole, 18, had just begun her freshman year at The Ohio State University when she passed away suddenly in early September. Hannah was born on June 13, 2002, in NYC, just three minutes after her twin brother, Will. While he was over 9 lbs., Hannah's mathematical mind observed that her 6 lbs. 13 oz. matched the date. Her first couple years were spent in the beautiful Bronx, before her family moved to Delmar, outside Albany, NY. She had lots of fun playing with friends from the neighborhood and preschool, as well as doing activities such as art, music, apple-picking and snow angels. At Bethlehem Preschool, she met her first BFF. Friendship would be the joy of her life. Hannah's family moved to Ellicott City, MD, in 2007, when she and her brother started kindergarten. She made friends quickly on the block and at school. Her activities included soccer, horse-back riding, dancing, drama, and karate, but what she enjoyed most was having adventures, sleepovers, and fun with her many friends. In eighth grade, she entered The Jemicy Upper School. From 2015 until her graduation in 2020, Hannah developed confidence in her voice and her point of view through the tremendous teaching, love and support she received there. In remembering her, Jemicy said she "not only became an outstanding student, but a student who stood out!" She was an avid and creative writer with a unique voice; she was selected to share her narratives at the Evening of the Arts and Coffeehouse events multiple times. She played tennis for four years at Jemicy (winning the Most Improved Award). Hannah was also a talented and insightful photographer; she enthusiastically captured the essence of her classmates when she took their casual senior portraits for the yearbook. In her junior year, she received a Headmaster's Commendation for that work. Her vivacious, ironic, witty, and enthralling personality made her a joy to be around. It was easy to understand why the Senior Class chose her to be their vice president. Despite the challenges of 2020, Jemicy was determined to provide an in-person graduation and on June 19th, families arrived in their cars for a socially-distanced event. There was an imposing stage and large video screen so all could see. Hannah was one of the students chosen to deliver a senior address, the final one from the students. She shared her experience: "I used to hate school every day; sitting in class was a brutal reminder of my stupidity. I built up a persona to protect myself, assuming that if I never let people get to know the real me, I would never have to listen or consider it valid if people thought I was dumb, weird, or a tad bit wacky, because they wouldn't know the real me. This like many of my other foolproof plans began to backfire when all I could see in myself were the things I was trying hard to make sure others couldn't think about me. If I didn't come here, I would not be 5/8 of the person I am today. I am not preaching that this place has been perfect or that every day was amazing. I've spent my fair share of time crying in the bathroom, but there is not a single place I would rather publicly cry. To sum up…thank you, all of you. The ups and downs, the good and bad, I think we all grew together; we've made each other great. I cannot wait to see what you all will do. I know it will be nothing less than exceptional. Thank you, truly." After graduation, Hannah's summer included taking photographs, demonstrating for racial justice, going to the ocean, caring for the earth by picking up trash where she found it, planting flowers, doing yoga, having fun with friends, and playing with her dogs. Once she arrived at OSU, she enjoyed time with her roommates and the beginning of classes. Hannah is survived by her loving family, parents Beth O'Leary and Brien O'Toole, and brother Will; Grandmother Adele O'Leary; and devoted aunts and uncles, Cathy and David Goldwyn, Martin and Brenda O'Toole, and Maura O'Toole, and her two first cousins, Matt and Ben. If you would like to honor Hannah's memory with a gift to Jemicy School that will recognize her individuality and character, her many talents, and the light she shared with her school community, please visit https://jemicyschool.givingfuel.com/jemfund-h20 . Hannah's presence lit up all around her. Those of us who love her will continue to extend that light, her care for the environment, and her concern for justice. "If I can stop one heart from breaking, I shall not have lived in vain" (Dickinson).

Hannah Adele O'Toole, 18, had just begun her freshman year at The Ohio State University when she passed away suddenly in early September. Hannah was born on June 13, 2002, in NYC, just three minutes after her twin brother, Will. While he was... View Obituary & Service Information

The family of Hannah Adele O'Toole created this Life Tributes page to make it easy to share your memories.