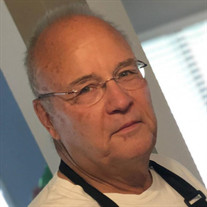 Judge H. William Pollitt, Jr. passed away on August 13, 2020 in Columbus, Ohio. Bill was born on March 26, 1948 in Dayton, Ohio to H. William Sr. and Bonnie Jean Pollitt. Bill grew up in Dayton, Ohio. He graduated in 1966 from Belmont High School, Dayton, Ohio. After high school he attended The Ohio State University on a football scholarship, where he received a B.S Education in 1970. During these years he was proud member of the Kappa Sigma social fraternity. Bill was a Varsity "O" football letter winner, who was an integral member of the 1968 National Championship team and 1969 Rose Bowl Champions. He became a Graduate Assistant Coach under Woody Hayes in 1970 and 1971. Bill was encouraged by his football coach, Woody Hayes, to attend law school. Bill accepted the challenge, and graduated from Capital University Law School, J.D., in 1974. He pursued his legal career as a criminal defense attorney from 1974 to 1978. Bill accepted an invitation to become a Columbus Senior Assistant City Attorney, Prosecutor's Division, in 1978. Bill was a greatly valued and key leader during Greg Lashutka's tenure as Columbus City Attorney. He continued in that capacity until his appointment by Governor Voinovich in 1996 to the position of Judge of the Franklin County Municipal Court. Bill was overwhelmingly reelected numerous times to that office. Judge Pollitt earned the respect of the lawyers and his fellow judges by consistently earning high peer ranking reviews. Bill brought fair and firm justice to all who came before him. Bill was a unique man who grew up humbly. God made only one H. William Pollitt Jr., then broke the mold, because no one could duplicate his enthusiasm for life and genuine love for his fellow man. Bill was never judgmental, but had strong principles. If you were his friend, you knew you were blessed. Bill married Lee on October 18, 2002 in Columbus, Ohio. They have been happily married for what would have been 18 years this October. Lee was a strong and steadying influence for a man whose instincts were always to push himself to live life fully. Bill deeply loved his entire family. He was possessed of a keen wit, strong sense of humor, and greatly enjoyed regaling others with his priceless stories. Music was as important to his soul as good food to his palate. Bill never met a stranger. He loved the game of golf and enjoyed all that came with that sport. Bill was preceded in death by his father, H. William Sr. and his mother Bonnie Jean Pollitt. Bill is survived by his devoted wife Lee, of Columbus, Ohio, his daughters Elizabeth Anne (husband Patrick Cole Imwalle) and Jessie Rae (husband Paul Ivan Teetor) and granddaughter Oaklynn Imwalle. Now that we are in safer times, a public celebration of Bill’s life will be celebrated at 11 a.m. on Friday, August 13, 2021 at Sunset Cemetery, 6959 W. Broad St. Galloway, OH 43119. Arrangements by SCHOEDINGER NORTHWEST CHAPEL. To share memories or condolences, please visit www.schoedinger.com.

The family of H. William Pollitt Jr. created this Life Tributes page to make it easy to share your memories.

Send flowers to the Pollitt family.