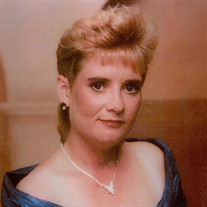 Gretchen Lynne Cox (Geyer), the daughter of James and Meta Geyer, was born on July 27th, 1960. Gretchen died peacefully in her sleep March 6, 2021 at 4:05pm after a decades long battle with the illness Multiple Sclerosis and associated symptoms. Gretchen was born in Jackson Michigan, raised in DeTour Village and Sault Ste. Marie, Michigan. She was a 1978 graduate of the DeTour Area School, DeTour Village, MI where she played basketball and was a cheerleader. Gretchen loved animals, read quietly by herself but was extremely sociable and enjoyed the company of her friends and family throughout her life. On May 3rd of 1986 she married her husband of 34 years, Curtis William Cox, U.S. Coast Guard. In 1989, Gretchen was awarded the "U.S. Coast Guard's Public Service Commendation" for her direct assistance during an off-duty rescue Curtis performed of a man and two children off the coast of Point Betsie Michigan. Gretchen attended for a brief time, Lake Superior State University and worked as a server and hostess at various locations around Michigan, including historic Mackinac Island. She also worked at various locations where Curtis was stationed including Frankfort, MI, Palatine, IL and Kenosha, WI. Gretchen, who was diagnosed with Multiple Sclerosis directly after graduation from high school, would not let the illness slow her down. She would go on to volunteer her time as a companion to the elderly while she and her husband were stationed with the USCG in Mississippi and as a volunteer trainman and steam locomotive shop worker alongside her husband many weekends at the Illinois Railway Museum near Chicago, IL in the 1990s. Gretchen was recognized by the U.S. Coast Guard for her commitment and support as a military spouse during Curtis's U.S. Coast Guard Retirement from Active Duty Ceremony in 2000. Gretchen moved to Columbus, OH, and Curtis' childhood home in 2005 so he could assist with his elderly parents' care. Once they passed, she and Curtis settled in the Polaris Area on the far north side of the city. Gretchen is survived by her husband Curtis; mother, Meta; siblings, David, Jewell, Ellen, and James. Gretchen's Celebration of Life event is being held here in Columbus so her many nearby friends and family can honor her life. Gretchen lived with Curtis in many locations around the country including Columbus, but Northern Michigan was always home for her. Curtis will therefore take her remains north to her beautiful Michigan and to her family for her final interment. Gretchen's family will receive friends on Tuesday, March 16, 2021 from 11am-12:30pm with a service to follow at SCHOEDINGER NORTH, 5554 Karl Road, Columbus. Guests are respectfully asked to wear a mask and attendance will be monitored to ensure safety for everyone attending. In lieu of flowers Curtis asks anyone who wants too, to donate in Gretchen's name to: Hospice and Palliative Care of Central Ohio. The Dempsey Family Education and Resource Center via Ohiohealth Foundation directed to the Dempsey Center. The Multiple Sclerosis Society or any charity of your choosing.

Gretchen Lynne Cox (Geyer), the daughter of James and Meta Geyer, was born on July 27th, 1960. Gretchen died peacefully in her sleep March 6, 2021 at 4:05pm after a decades long battle with the illness Multiple Sclerosis and associated symptoms. Gretchen... View Obituary & Service Information

The family of Gretchen Lynne Cox created this Life Tributes page to make it easy to share your memories.