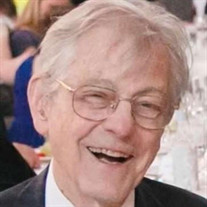 Grant "Chig" Wilcox Cooke, age 91, went home to be with our Lord on Monday, November 15, 2021. Born in Columbus, Ohio on August 25, 1930, to Carl Clement Cooke Sr. and Dorothy (Beebe) Cooke and shared his birthdate with his father. Grant grew up with his older brother, Carl Clement Cooke Jr., in the family home on Cooke Road in Columbus Ohio. This home was built on part of the original 300-acre farm of early settler, Henry Cooke. He graduated from Glenmont Grammar School, Crestview Jr. High School, University High School (1948), Kenyon College (1952) with an AB Degree, and The Ohio State University (1955) with a Master's Degree in Engineering. His first permanent job was with the family-owned business The Fritz-Rumer-Cooke Co. and then practiced as a Professional Engineer as the owner of Cooke Consulting Group. He was an accomplished athlete in football, basketball and track. He was a member of Delta Tau Delta Fraternity, a Life Member of the American Railway Engineering and Maintenance of Way Association (AREMA) since 1957 and Past Chairman of their Committee 8. Most of his Professional Life had been with projects related to railroad bridges and track construction. Grant is proceeded in death by his wife of 56 years Patricia Bennett Cooke; parents, Carl Clement Sr. and Dorothy Cooke; brother, Carl Clement Jr., and sister, Ellen Cooke. He is survived by his daughter, Allison (Nicholas) Davis; granddaughter, Heather (Kevin) Hall; grandson, Matthew (Amy) Davis; step-grandson, Nathan (Angie) Davis; great-grandsons, Braden, Logan and Kellen Hall; great-granddaughters, Abigail, and Addison Davis and Maren Hall along with step great- grandchildren, Jackson and Parker Davis. Grant also had many nieces, nephews and great nieces and nephews, all of which form a most happy Christian family. Funeral services will take place at Saint James Episcopal Church, 3400 Calumet St. Columbus, OH 43214. on Wednesday, December 8th at 11:00 am and a graveside service at Union Cemetery following the service. Family has entrusted SCHOEDINGER NORTHWEST with funeral service. Please visit www.schoedinger.com to sign the online guestbook or to share a special memory of Grant.

Grant "Chig" Wilcox Cooke, age 91, went home to be with our Lord on Monday, November 15, 2021. Born in Columbus, Ohio on August 25, 1930, to Carl Clement Cooke Sr. and Dorothy (Beebe) Cooke and shared his birthdate with his father. Grant grew... View Obituary & Service Information

The family of Grant "Chig" Wilcox Cooke created this Life Tributes page to make it easy to share your memories.

Grant &quot;Chig&quot; Wilcox Cooke, age 91, went home to be with our Lord...

Send flowers to the Cooke family.