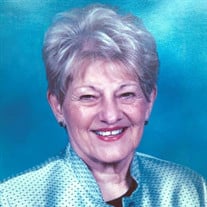 Jean Finn, born Glenna Jean Hanson on December 29, 1928, died on December 8th, 2021, just shy of her 93rd birthday. She is survived by one sibling, Dorothy Bennett, 96, of Greenbrae, CA, of the six children born to Nettie (Johnson) and Henry Hanson in Park River, North Dakota. They lived on a farm, walked to a one-room schoolhouse. After the early deaths of their parents, the siblings were taken in by their aunts, Nell and Delma Hanson, who once panhandled for gold with Jean in the Yukon. After graduating from the University of North Dakota, where she lived in the Delta Gamma house, performed with the Flickertails, and developed a keen sensibility for bridge, Jean moved to Cleveland, Ohio, the city where her sister Janet had gone to work. There, she enjoyed a brief career at NBC in the radio division. At one point, she visited her sisters Dorothy and Eunice in California. They encouraged her to stay, but when Jean went back to Cleveland to gather her belongings, she instead met her first husband, John J. (Jack) Fuerst, Jr. They married in February, 1955. Their two children, John J. Fuerst, III and wife Grace Asquith, of Lafayette, CO and Catherine Nell Fuerst, and husband Craig Townsend, of Brooklyn, NY, survive her, along with three grandchildren: J. Jacob Fuerst, IV, Caleb Fuerst Townsend, and Asher Fuerst Townsend. Jean is also survived by four nieces and nephews to whom she remained close throughout her life: Susan Moers, of Lafayette, CA, and Mike Lee of San Rafael, CA, children of Eunice Lee; Jill Garbutt Gims, of Bluffton, SC, and Stuart Garbutt, of Chicago, IL, children of Janet Garbutt. Her sister Joy Hennum lived in Golden Valley, MN. Her brother Allyn remained a lifelong resident of North Dakota, passing away this fall just after his 100th birthday in Bismarck. Throughout her married life, Jean was active in the Romans Catholic Church, to which she converted, and in the arts and education. Her first husband passed away in 1975. She met John L. (Jack) Finn a few years later; they married in 1980 and she moved to Columbus, Ohio, joining the Finn family. Jack Finn passed away in 1990, after a marriage that included many miles of travel, tallying all fifty states and Russia and China. Jean is therefore also survived by his children and their spouses- Michael and Janet Finn, Maureen and Tom Withgott, John and Bebe Finn, James and Susan Finn- and their six children and numerous grandchildren. Jean continued to travel extensively with friends and family for the rest of her life. She was active in the Friends of the Josephinum and the Serra Club, and was a supporter of the arts, jazz, and the Columbus Zoo. She always had a piano in her house and enjoyed playing it. Bridge and Rummikub remained her favorite pastimes to the end of her life. And she did not pick up the phone between 7:00 and 7:30 pm when Jeopardy! aired. Her chocolate chip cookies were renowned, and her grandsons adored her meatloaf. A memorial service will be held in the Spring at the Chapel at Mother Angeline McCrory Manor/ The Villas at St. Therese, where she lived for the last two years. Arrangements by SCHOEDINGER EAST, 5360 E. Livingston Avenue, Columbus, OH 43232.

Jean Finn, born Glenna Jean Hanson on December 29, 1928, died on December 8th, 2021, just shy of her 93rd birthday. She is survived by one sibling, Dorothy Bennett, 96, of Greenbrae, CA, of the six children born to Nettie (Johnson) and Henry... View Obituary & Service Information

The family of Glenna Jean Finn created this Life Tributes page to make it easy to share your memories.

Send flowers to the Finn family.