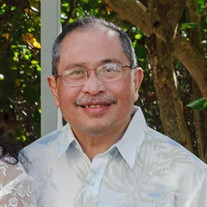 Gil Vergel de Dios, 66 of Hilliard formerly of Cleveland, Ohio, unexpectedly passed away Saturday, December 19, 2020 at Doctor's West Hospital. Gil is originally from Manila, Philippines and came to the United States in 1979 shortly after the passing of his father. Over the years, he resided in several locations such as California, New Jersey, Canada, and then Ohio. Gil graduated from De La Salle University in Manila, Philippines with a degree in Business Management and Advertising. He was an entrepreneur by heart and successfully built up a well-known Donut Shop and Bakery in Cleveland, which leveraged a decade of knowledge owning Dunkin Donut franchises in the 80's. His passion was serving his customers and interacting with employees -- joking around and having fun at work. He worked 15 hours a day as it was always "time to make the donuts". His work ethic, which set an example for his children, consisted of always keeping busy and working hard. He even went through a period of time when he worked multiple jobs (Donut Shop and Megas Beauty Care, Inc). In his younger years before life got busy, he was an avid music lover (Beatles, Chicago, Sinatra, Motown) and guitarist, often singing with his friends and family. He also loved watching sports - loving the Browns, Cavs, and Indians. Gil was always a "happy go lucky" guy and even on his most challenging moments in life, you would have never known it because he was too focused on making others laugh and smile. He also enjoyed bowling which became a regular family activity! Gil was preceded in death by his parents Antonio/Tony and Remedios/Mae. He is survived by his children: Joce Mae (Jeff) Fenton of Hilliard, OH, Tony (Michelle) of Lake Forest, CA, Ginelle (fiance Jeff Peterson) of Tampa, FL, and Gelver/Mykie (Nicole) of Delaware, OH; grandchildren Alexis, Ashley, Amber, Axl, Victoria and Vincent. There will be a private family service in Dublin, Ohio and a Memorial / Celebration of Life will be scheduled for a later date. SCHOEDINGER DUBLIN is assisting family with arrangements.

Gil Vergel de Dios, 66 of Hilliard formerly of Cleveland, Ohio, unexpectedly passed away Saturday, December 19, 2020 at Doctor's West Hospital. Gil is originally from Manila, Philippines and came to the United States in 1979 shortly after the... View Obituary & Service Information

The family of Gil A Vergel de Dios created this Life Tributes page to make it easy to share your memories.