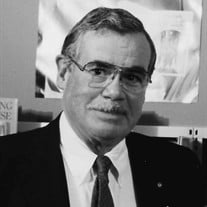 George S. "Gus" Hoster Jr. Gus Hoster died peacefully at home on April 10, 2021, five days after his 90th birthday, from complications of Merkle Cell Carcinoma. He was born Easter Sunday, April 5, 1931 in Pittsburgh, PA to George S. Hoster and Laura Wright Hoster, and grew up in Pittsburgh and Columbus OH. Gus graduated from Culver Military Academy, Culver IN, as Regimental Personnel Officer, and was always deeply proud of his connection to Culver and the "Old Guard" class of 1949. He attended Northwestern University and The Ohio State University, where he was a member of the Sigma Chi Fraternity. Throughout his entire life, flying was his favorite activity. At the age of 12, Gus rode his bike out to Norton Field on East Broad street to begin flight lessons. He obtained his private pilot's license at the age of 18 and immediately began his military and civil aircraft careers by flying co-pilot for Anchor Hocking during summer breaks. Hoster was a Captain and Senior Pilot, Squadron Test Pilot, Wing Transport Pilot, and Wing Air Staff Intelligence Officer in the United States Air Force, 49th Fighter-Bomber Group, and in the 121st Tactical Fighter Wing of the Ohio National Guard. He served on active duty at the end of the Korean War (Korea, Japan, Philippines) and was recalled to active duty during the Berlin Crisis. In 1957 he merged his love of banking, business, and airplanes by founding Aircraft Acceptance Corporation. He went on to specialize in aircraft leasing and financing as an executive with Huntington National Bank and Park National Bank, then expanded his career to consult mergers and acquisitions, founding the Hoster Group in 1984. Most recently he was Chairman of the Board of Evans Capital Corporation, a position he held until his death. He regarded his colleagues at Evans as extended family. He absolutely loved his work, never truly retired, and up until his death was actively engaged in the development of the Evans Farm community in Delaware County. Hoster had many business, industry, and community related board affiliations throughout his lifetime, including past Chairman of the National Air Transportation Association. He was a long-time member of Rotary in Columbus and Gahanna, a lifetime member and past president of Rocky Fork Hunt and Country Club, a retired Rear Commodore of the Great Lakes Cruising Club, and a Quiet Birdman. Hoster was active in the Ohio Republican Party for many years, and was most proud of his work for cousin George H.W. Bush's presidential campaigns. He is preceded in death by his first wife, Nancy E. Hoster. He is survived by his wife of 47 years, Linda B. Hoster. He is also survived by his brothers, William Hoster, Theodore Hoster, and Stephen Hoster (Sheila Hoster); children, Mark Hoster, Laura Hoster, Elizabeth Hoster, George "Jake" Hoster III, and Christopher Hoster (Krista Hoster), as well as grandchildren, Hannah, Olivia, and Carson; nieces and nephews, and an extended network of longtime friends in Columbus Ohio, Presque Isle, MI, and around the country. Gus loved to travel throughout his life. While maintaining his "home base" in Columbus, he spent as much time as possible at Grand Lake, Michigan, where he enjoyed boating and snowmobiling. He enjoyed European trips with family and friends to see old relatives and make new memories, returning home to enjoy a Hoster Beer. Family will have visitation at SCHOEDINGER MIDTOWN, 229 E. State St. from 4 p.m. to 6 p.m. on Thursday, April 15, 2021. A graveside service will be at Green Lawn Cemetery at 11 a.m. Friday, April 16, 2021. In lieu of flowers, Gus asked that donations be made to the Kendra Melanoma research fund (fund number 311842) at the Ohio State University (https://www.giveto.osu.edu/makeagift/?fund=311842) or to the Culver Academies Scholarship Fund (https://www.givecampus.com/campaigns/8112/donations/new) 1300 Academy Road, Culver IN 46511. We're going to miss you, "Skee King." Fly high. To share a special memory of Gus or to sign his online guest book, please visit www.schoedinger.com.

The family of George S. Hoster created this Life Tributes page to make it easy to share your memories.

Send flowers to the Hoster family.