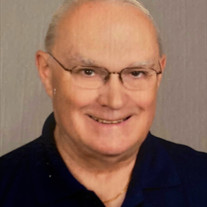 Geoffrey M. Thrall 1939 - 2021 Geoffrey M. Thrall, of Delaware, Ohio, passed away on November 17, 2021. Geoff was born to Helen and Guy Thrall on January 9th, 1939. He is preceded in death by his parents, his loving wife of 51 years, Roberta F. "Bobbie" Thrall, as well as his daughter Melissa A. Bishop. Geoff was born in Columbus, Ohio and graduated from North High School in 1956. He continued his education at The Ohio State University, where he graduated in 1961 with a BS in Mechanical Engineering, and was a member of the Delta Upsilon Fraternity. Geoff had a dedicated career in engineering and project management, and notably worked in Columbus at United McGill Corporation, and subsequently at Kal Kan Foods until his retirement in 1988. Geoff was a member of St. John's Episcopal Church, Worthington, Ohio for 25 years and was a member of the choir. Geoff was also a member of St. Peter's Episcopal Church, Delaware, Ohio for 16 years where he and his wife served on the Altar Guild as well as the Usher Corp and the "People in Need" bread ministry before Bobbie passed last year. Additionally, he was a member of Worthington Hills Country Club, where he enjoyed gin club with his friends, and was part of the Senior Seven who enjoyed monthly meals out together. With his generosity, Geoff supported numerous charitable causes, and volunteered at several organizations including the Worthington Historical Society. Geoff loved to travel with his wife, Bobbie, and visited Great Britain, Scotland, Ireland, France, Germany, Netherlands, Russia, Greece, Aegean and Ionian Islands, Turkey, Spain, Portugal, Italy, Canada, and the Caribbean Islands. He was an avid Ohio State Buckeye football fan, a passion he passed along to his son Rob at a young age. Geoff enjoyed traveling with the Buckeyes to Ohio State Bowl games, including National Championship Games with both Bobbie and Rob in attendance. Geoff was a caring and loving husband, father, and grandfather, and a friend to many. He was an influential mentor and role model to his family and will be deeply missed by his son, Robert (Christine) L. Thrall, and daughter, Chauntey L. DesRoberts. He will be greatly missed by his grandchildren, Brandon P. Thrall, Matthew G. Bishop, Andrew Lombardi, Alissa (Ryan) Dempsey, Lacey (Steven) Schumacher, Nicole DesRoberts, and David DesRoberts, and survived by his brother Stephen (Patricia) Thrall . Care entrusted to Schoedinger Funeral and Cremation Services, Worthington, where the family will have a private service at a date to be determined. In lieu of flowers, please donate in Geoff's memory to People in Need, 138 Johnson Ave., Delaware, Ohio 43015. Please visit www.schoedinger.com to leave messages and condolences for the family.

The family of Geoffrey Thrall created this Life Tributes page to make it easy to share your memories.