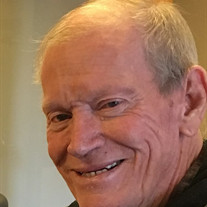 General Perry, Jr. age 76 passed away Sunday, February 21, 2021 at Winchester Place Nursing and Rehabilitation Center. Junior was born in Breeden, WV to the late General Sr. and Lydia (Messer) Perry. He moved to Central Ohio and began his career as a tree trimmer until his retirement 30 years later. He was a true outdoorsman; He loved to hunt deer, turkey, rabbit, squirrels, and coon as well as fishing. He enjoyed going to card shoots when he was a member of the Southeast Conservation Club. Being an outdoorsman, he was naturally a gun collector and a member of the National Rifle Association. He enjoyed taking his camper on his hunting trips. Many times he would just go to his camper when it was in his driveway to prepare it and his gear for his next trip. In his younger days, Junior enjoyed racing cars and still had a passion for automobiles. He was a humble gentleman who took tremendous care of his family. He had a prankster side to him but was always generous to those he met. In addition to his parents, Junior is preceded in death by his former wife, Wanda Gail Perry; siblings Francis Sturgil, Lucy Williams, Lodie Perry, and Andy Perry. He is survived by his children Melissa ( Brian Gordon) Ritts, Vickey (Tim) Hogan, Jeffrey (Michael Kinnison) Perry, and Tessa (Daniel) Hogan; he was "Papaw" to his grandchildren Tabitha (fiancé Anthony Carr) Layton, Steven (Melissa) Layton, Tiffany (Evan) Lawrence, and Dylan Hogan; great-grandchildren Jaxson Layton, Adalynn Carr, Tanner Lawrence, Troy Carr, Wesley Lawrence and Lakelyn Layton; siblings Isabelle Kirk, Jessie Perry, Albert Perry, Myrtle Waller, Jennings (Barbara) Perry, Liz Perry, Cathy Perry, Tennessee Dillon, Eunice Runyon, and Gusty Stroud. Junior's family will receive friends 4-7 PM Friday, February 26 at Schoedinger Grove City 3920 Broadway. GUESTS ARE REQUIRED TO WEAR MASKS AT ALL TIMES IN THE BUILDING AND ONLY 25 PEOPLE WILL BE ALLOWED IN THE BUILDING AT A TIME TO ENSURE SOCIAL DISTANCING FOR ALL IN ATTENDANCE. Due to the Covid Pandemic, a Private Family Funeral Service will be held. Interment at Sunset Cemetery. Contributions may be made in Junior's name to the Alzheimer's Association www.alz.org . Visit www.schoedinger.com to share a favorite memory or watch Junior's funeral service.

The family of General Perry Jr. created this Life Tributes page to make it easy to share your memories.

Send flowers to the Perry family.