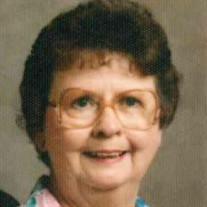 Garnet Winters, 96, of Columbus, passed away peacefully in her sleep at Riverside Methodist Hospital on December 13, 2020. Born on June 24, 1924 to Lawrence Ratliff and Clara Priest in Columbus, OH, Garnet was the youngest of 6 girls, 2 of whom died in infancy. She grew up in the Columbus area, dropping out of high school to help care for her sister’s children. She enjoyed dancing and met her late husband, Eugene “Jamie” Winters, at the USO Dance Club for Servicemen. Together with their friends Tom and Lou Armstrong, they enjoyed frequenting car shows. She also found joy vacationing in the campgrounds of the Smoky Mountains with her friends and family. When she wasn’t fishing or watching birds, she could be found playing bingo WINNING card games like hand & foot and euchre. Garnet worked on the assembly line for many years with her sisters and daughter-in-law at Ranco, where she retired. Garnet loved hosting her family for large dinners and get-togethers in her home, and always made sure that the grandkids had candy to sneak from their parents. An avid bowler, she played for many years, earning awards well into her senior years. She was also a member of Westerville Senior Center where she continued WINNING card games and enjoyed taking trips. She was even known to help plan events from time to time. A lover of animals, she was never without a cat or dog for companionship. Most recently, she rescued and socialized a feral kitten and named it Blackie, eventually bringing it into the home with her other cat, Puddin’. She loved watching the birds with them, keeping the bird feeders full in her backyard. After the passing of her husband, she still enjoyed the company of Tom Armstrong, who had also lost his wife. Together, they attended Maple Grove United Methodist Church. They remained dear friends and lifelong companions. She will be deeply missed by all those that knew and loved her. She was preceded in death by father Lawrence Ratliff, mother Clara Priest Epley, loving husband of 53 years Eugene Winters, son Eugene Winters Jr., sisters Elsie McConnell, Gladys (Sam) Polihronopolos, Wilda (John) Taranto; and half-brother Charles Epley Jr. She is survived by son Gary (Arlena) Winters; daughter-in-law Barbara Lelux; grandchildren Keith (Theresa) Lelux, Wendy (Jeff) Prater, Randal (Diana) Winters, Christopher (Erica) Winters, and Bethany Winters; great grandchildren Justin Ross, Corey Ross, Eva Winters, and Jayden Thomas; nieces Donna Hammac and LaVonne Kendrick; nephews Joseph Whalen, Wendel Taranto, and John Taranto; and dear friend Tom Armstrong.

Garnet Winters, 96, of Columbus, passed away peacefully in her sleep at Riverside Methodist Hospital on December 13, 2020. Born on June 24, 1924 to Lawrence Ratliff and Clara Priest in Columbus, OH, Garnet was the youngest of 6 girls, 2 of... View Obituary & Service Information

The family of Garnet Winters created this Life Tributes page to make it easy to share your memories.

Garnet Winters, 96, of Columbus, passed away peacefully in her...

Send flowers to the Winters family.