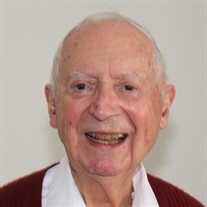 Frederick John (“Jack”) Eckfeld, age 92 of Columbus, Ohio, passed away peacefully on October 1, 2021. Born November 6, 1928 in Wellsville, OH, to Fred H. and Bianca MacLean Eckfeld, he graduated from Wellsville High School in 1946 and from The Ohio State University in 1950. After serving three years as an Ensign in the United States Navy during the Korean War, he earned a Masters Degree in Hospital Administration at the University of Minnesota. He was employed in hospital administrative positions for many years, and then served as a field representative for the Joint Commission on Accreditation of Healthcare Organization until his retirement in 1995. Jack loved music, sang in church choir for over 30 years, played trombone for 10 years in a German band, and with his wife ushered for the Columbus Symphony for 15 years. Also with his wife he traveled to 6 of the 7 continents. Other activities he enjoyed include reading, building model ships, feeding birds and reading to his grandchildren. He was preceded in death by his brothers, Joseph F. Eckfeld, D. Norman Eckfeld, and his sister Mary Bianca Bacon. In addition to his sister, Gretchen Logan, of Phoenix, AZ, Jack is survived by Nan, his loving wife of 63 years, and daughters Karen Roberts of New Holland, OH, and Lynn Kopechek of Dublin, OH. He was blessed with, and loved by, 12 grandchildren and 25 great-grandchildren. Due to Covid-19 issues and the size of his family, a private memorial service will be held at a future date.

The family of Frederick John "Jack" Eckfeld created this Life Tributes page to make it easy to share your memories.

Send flowers to the Eckfeld family.