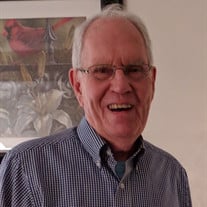 Fred E. Bice, age 89, died peacefully at his home in Columbus, Ohio on September 16, 2020. He was born on July 16, 1931 in Lima, Ohio to Benjamin and Gladys (Githens) Bice. On February 2, 1957 he married Jane Garner, who predeceased him. Mr. Bice was a barber for 22 years and retired in 1993 from Superior Coaches. He served in the United States Army during the Korean War and was a life member of the V.F.W. Fred was active in the Hilliard Senior Center and enjoyed going to lunch with his many friends, and playing corn-hole. He was very popular at his senior living apartment where he started the first corn hole activity. He was an avid golfer and enjoyed watching the PGA. He was also a huge Buckeye fan. Survivors include two daughters; Kathy (Mike) Ryan of Virginia and Janet (Paul) Konicek of Westerville, Ohio and grandchildren Gina Mare Volpe of Colorado Springs and Francesca Rose Volpe of Cincinnati, and his second love of his life, his companion Bernice Mattison. In addition to his wife, he is predeceased by his daughters Karen Marie Bice and Beverly Sue Volpe, and his brothers Howard, Donald, Dale, Charles, Ray, Harold, and a sister Eileen Mullen. The memorial mass will be at St. Brendan Church, 4475 Dublin Rd, Hilliard, OH 43026 on October 3, 10:30 am. Memorial Contributions can be submitted to Capital City Hospice, Columbus Ohio, and AmVets.

The family of Fred Bice created this Life Tributes page to make it easy to share your memories.

Send flowers to the Bice family.