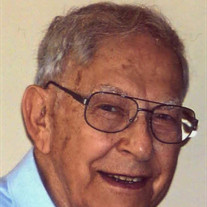 Frank Angelo Plescia, 94, of Circleville, passed away Monday, February 8, 2021. Frank was born and raised in Cleveland, Ohio, and was the son of the late Domenic and Maria Plescia. He was a 1944 graduate of East Technical High School. Working during the day, Frank attended the Evening College at the Fenn College of Engineering (now Cleveland State University) and was active on the night school newspaper and the Lambda Iota Delta Fraternity while earning his Bachelor's Degree in Electrical Engineering. Frank joined General Electric in 1950 as detailer with the Lamp Equipment Operations group. In 1965, Frank was transferred to the Circleville Lamp Plant as a Manufacturing Projects Engineer where he was responsible for building and grounds projects. After 36 years, Frank retired from the GE in January 1987. Frank enjoyed playing baseball and joined the Knights of Columbus while living in Cleveland to primarily further his love of the sport. He also enjoyed gardening, fishing, canoeing on Hargus Lake, golfing, decorating the Christmas tree and designing outdoor holiday lighting. He also enjoyed traveling with his wife, Nancy. In the Community, Frank volunteered with Boy Scouting programs, was on the Board of Directors at the Senior Center and United Way. He was very active at St. Joseph's Catholic Church as a member of Parish Council, a Eucharistic Minister, Bishop's Annual Appeal, RCIA, parish youth programs, the Community Kitchen, and parish dinners. He is a Life member of the Knights of Columbus and the Fourth Degree. He recruited more than 50 new members with his quiet kindness. He served as Grand Knight and Faithful Navigator and held various other offices throughout the years. Even in his waning years, he enjoyed the people and activities at Wyngate's Senior Living Community including being voted "Homecoming King" of The Inn Assisted Living Unit. He enjoyed playing bingo and just being silly and bringing smiles and comfort to others. Frank's greatest love was his family. He is survived by his wife of 67 years, Nancy; daughter Marcia Huff; sons Frank (Carly) and Christopher (Renee): grandchildren Nicholas, Anthony, Daniel, and Maria. He is preceded in death by his son, Mark. A special thank you to all the caregivers who cared for Frank during his days at Wyngate. He is now at peace. Funeral Services will be private with a Celebration of Life to be held when it is safe to do so. In lieu of flowers, memorial donations may be made to the Plescia Family Scholarship Endowment Fund #320AIL, c/o The Catholic Foundation, 257 East Broad Street, Columbus, OH 43215.

Frank Angelo Plescia, 94, of Circleville, passed away Monday, February 8, 2021. Frank was born and raised in Cleveland, Ohio, and was the son of the late Domenic and Maria Plescia. He was a 1944 graduate of East Technical High School. Working... View Obituary & Service Information

The family of Frank Angelo Plescia created this Life Tributes page to make it easy to share your memories.

Send flowers to the Plescia family.