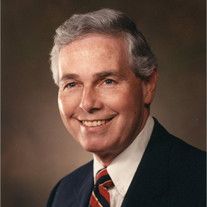 Frank Michael Herrel Jr., known as Mike to friends and Papa to his family, lived most of his life in Bexley, Ohio. He met the love of his life, Edith Mae (Edie) Hamilton, at Bexley High School. After graduation, Mike joined the Navy during World War II then returned to Columbus to attend The Ohio State University. Early in his career he worked for Diamond Milk Co. for his future father-in-law, T. Kline Hamilton, and later became owner and CEO. Mike found deep joy in bringing happiness to others. He dedicated countless hours to church, community and educational organizations, including, Wesley Glen and Wesley Ridge Retirement Communities (chairman of the Board of Trustees); Methodist Theological School of Ohio (Advisory Board); Boy Scout Troop 166 (Committee Chairman); and Ohio State University Wesley Foundation (Treasurer of the Board), among others. His most significant volunteer work was with Ohio Northern University (Trustee, 35 years, Chairman, 6 years). He received an Honorary Doctorate of Business Administration for his service there. Mike was a man of deep faith and served as the financial secretary at Bexley United Methodist Church in retirement after selling Diamond Milk Co. Mike entertained as a tap dancer in his youth and continued to dance with Edie throughout their 71 years of marriage. They enjoyed traveling the world and encouraged their family to join on these enriching and educational adventures. Mike had an ability to make friends around the world during his journeys, and he considered friends from China, Ukraine, Ecuador and Jekyll Island, Georgia, a part of his family. One of Mike's greatest joys was spending time with his family: children Dan Herrel, Mike (Reeny Walsh) Herrel, and Nancy Herrel (Bill) Nuss; grandchildren Michael (Rachel) Herrel, Jennifer Nuss (Jeff) Clements, Patrick Herrel and Stephanie Nuss (Jack) Skinner; great-grandchildren Samuel and Leah Herrel and John, Sarah and Benjamin Skinner. Mike would often be heard saying to his wife, "whatever makes you happy, dear." His gentle kindness, sharp wit, humble leadership, and fierce loyalty will be remembered by all who knew him. Mike, age 94, passed away peacefully Saturday, Sept. 18, 2021, at home, surrounded by his loving family. He was born on Valentine's Day in 1927 to Frank Michael and Mary (Kennelly) Herrel - a fitting birthday for such a loving man. Mike was preceded in death by his parents, his sister and brother-in-law Susie and Wilson Knipe, his brother-in-law and sister-in-law Tom and Ann Hamilton, and his lifelong best friend Bob Macklin. He is survived by his loving wife, Edie and family, as well as very special cousins, nieces and nephews and their families. A celebration of Mike's life will be held at Bexley United Methodist Church, 2657 E. Broad St, Bexley, Ohio. Calling hours at the church will be from 4-6 p.m. on Friday, Sept. 24, and Saturday, Sept. 25, from 10:30-11:15 a.m. with a celebration of life service beginning at 11:30 a.m. Colleen Ogle will be officiating. In lieu of flowers, contributions may be made in Mike's memory to Bexley United Methodist Church Fund at www.bexleyumchurch.com/giving/, Ohio Northern University Northern Fund at www.onu.edu/give, or Wesley Ridge Retirement Community Fund at www.wesleyridge.com/giving/donate-now/.

Frank Michael Herrel Jr., known as Mike to friends and Papa to his family, lived most of his life in Bexley, Ohio. He met the love of his life, Edith Mae (Edie) Hamilton, at Bexley High School. After graduation, Mike joined the Navy during World... View Obituary & Service Information

The family of F. Michael Herrel created this Life Tributes page to make it easy to share your memories.

Frank Michael Herrel Jr., known as Mike to friends and Papa to...

Send flowers to the Herrel family.