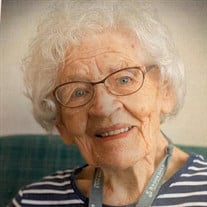 Frances Bruney, 91, passed away peacefully, surrounded by family, Sunday, January 10, 2021. Frances was born in Springfield, Ohio in 1929, the eighth child of Anthony and Maria Szempruch. She is preceded in death by her husband, Roger (Bill) Bruney, her parents, and 10 siblings, brother: Walter, August, Anthony, Thomas, Joseph and Robert, and sisters: Helen, Catherine, Amelia, and Josephine. She is survived by her children: James (Cheryl), Theresa Ervin (Dennis), John, and Susan Loar (Robert) and her grandchildren: David, Andy, Michael, Eric, Marie, Ben, Elizabeth, Alex, Alayna and Tyler, her 10 great-grandchildren, her sister Mary J. Schwartz, her brother Edward Szempruch and numerous nieces and nephews. Frances moved to Columbus, Ohio after marrying her husband, Bill, also a Springfield native, in 1954. They settled in New Albany where she lived for more than 60 years. Fran, or “Sis” as she was known in her family, was always “doing something”, she never liked to be idle. She served God, by singing in the choir at both St. Matthew Church in Gahanna, where she was a founding member, as well as Church of the Resurrection in New Albany, where she was also a founding member. She felt that singing was one of the best ways to praise God. She continued her service to God by working as the School Secretary for St. Matthew Church in Gahanna for 18 years, taking Holy Communion to those who were confined to their homes and nursing homes, delivering Meals on Wheels; often with one or two of her grandchildren in tow, baking cookies, cakes, and pies for whatever event the church was holding. Church was not the only thing that kept her busy. Frances loved spending time with friends, whether it was golfing, line dancing, playing euchre, attending plays or other events with them. She could often be found working in her yard and garden or taking long walks just to be outside. Spending time with family was her greatest joy! Coming from a large family, tradition was important. Easter celebrations were always a special event with her children, grandchildren, and great-grandchildren. Gathering everyone together the day before Easter to prepare the annual “Easter Soup” - a traditional polish meal served on Easter. After Easter Mass on Sunday her home would be filled with the addition of her extended family and the love, the warmth and the smell of delicious food would fill the air for miles around. As the matriarch of the family the influence of Frances will be deeply missed! She was the glue that held the family together. As we move into a new stage of life, we know that her voice will forever remain in our ears reminding us that we are stronger together and to keep tradition alive. Mass of Christian burial will be held on Friday, January 15, 2021 at 11am at the Church of the Resurrection in New Albany, Ohio with Father Denis Kigozi officiating. In lieu of flowers, donations can be made to the Church of the Resurrection Legacy Campaign in Frances' name. Mass will be live streamed and can be viewed at www.cotrna.org.

Frances Bruney, 91, passed away peacefully, surrounded by family, Sunday, January 10, 2021. Frances was born in Springfield, Ohio in 1929, the eighth child of Anthony and Maria Szempruch. She is preceded in death by her husband, Roger (Bill)... View Obituary & Service Information

The family of Frances Bruney created this Life Tributes page to make it easy to share your memories.

Send flowers to the Bruney family.