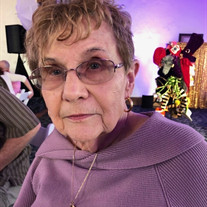 Fay Ann Scott, age 87, of Lewis Center, Ohio began her eternal life in heaven on January 3, 2022. Fay was born September 14, 1934, in Lansing, Michigan to the late Claire and Viola (Burns) Kaiser. After the death of her father she was adopted... View Obituary & Service Information

The family of Fay Ann Scott created this Life Tributes page to make it easy to share your memories.

Send flowers to the Scott family.