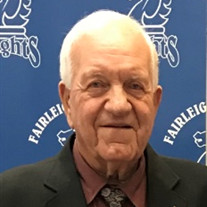 Everett Sheets Sr., age 85, passed away on January 7, 2021. He was born April 9, 1935 to his parents Willie and Elizabeth "Hylton" Sheets in Coalwood, West Virginia. Everett married his beloved wife, Nila in October of 1960 and treasured 59 years of marriage until her passing in 2019. He enjoyed his life's work as a truck driver for Roadway, retiring after 33 years of faithful service. He took pride in his 3 million safe driving miles and was honored by Roadway with his own semitruck, which displayed his name. He had a tremendous work-ethic which he instilled in his family. He saw the value of education and was incredibly proud of his children and grandchildren's academic achievements. He was an Honorable Past Master of the Scioto Masonic Lodge #6 and a member of the Shriners. Everett had remarkable intelligence, wit, and a sharp memory. Many would comment that he was a walking road-map, recalling routes across the United States with ease. He was known for being able to build or fix anything, from houses to cars. He not only worked on his own property but would never turn down someone needing help, whether it be his family, friends, or total strangers. His generosity and kindness was always evident and unmistakable. He loved people and thoroughly enjoyed his breakfasts with his buddies. He never met a stranger and was a skilled conversationalist. He always had a funny joke or story and could make everyone smile. Above all else, he loved serving strongly as the Patriarch of his family. He provided for his family unconditionally, was always their safety-net, and loved spending time with them. Anyone who met Everett immediately knew how proud he was of his family, as that was his favorite topic of discussion. He especially enjoyed watching his grandson, Evan, play baseball and was known to be his teams' biggest fan. He was a wonderful father, grandfather, brother, uncle, neighbor, and friend. Everett will be missed dearly by all who had the privilege of knowing him. Everett is preceded in death by his parents, wife Nila "Underwood" Sheets; and his son Steven Douglas Sheets. Left to mourn his passing are his children, Sylvia (John) McDonald and Glenn (Ida) Sheets Jr.; his grandchildren Trevor (Lauren) Sheets, Carrie (Jon) Mitchell, Everett Glenn Sheets lll, Victoria Sheets, Charles Sheets, Schelby Sheets, Ashton Sheets, December Sheets, Evan (Lauren) McDonald, Seth McDonald, and Abigail McDonald; 9 great-grandchildren; and his sisters Lou Harmon, Glenna Proffitt, Freda Gilkerson, and Betty Dingess. Per his wishes, cremation will take place. Arrangements have been entrusted to Defenbaugh-Wise-Schoedinger Funeral Home. Due to COVID, the family has decided to have a memorial service for Everett at a later date. Although COVID took Everett's life too soon, his memory will live on through all those who loved him.

Everett Sheets Sr., age 85, passed away on January 7, 2021. He was born April 9, 1935 to his parents Willie and Elizabeth "Hylton" Sheets in Coalwood, West Virginia. Everett married his beloved wife, Nila in October of 1960 and treasured 59... View Obituary & Service Information

The family of Everett Sheets created this Life Tributes page to make it easy to share your memories.

Send flowers to the Sheets family.