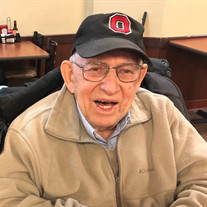 Eugene Hutchison, 93, of Columbus, passed away on November 16, 2020. He was born in Columbus on March 27, 1927 to the late James and Madeline (Drake) Hutchison. In addition to his parents, Eugene was preceded in death by his loving wife, Dorothy Hutchison; daughter, Sheryl Hutchison; and his siblings, James Hutchison, Kathryn Liston, Earl Hutchison, and Naomi Hutchison. Eugene was a high school graduate of Linden McKinley High School. Immediately following high school, he joined the United States Navy. He proudly served his country as a postal worker and was deployed during the World War II conflict. During his time in the military he was stationed in Guam, Hawaii, and San Francisco. After being honorably discharged, Eugene worked for many different companies ranging from the banking industry to Coca Cola and finally retiring from Jewel Tea after being in sales much of his career. In his free time Eugene loved spending time with his family. He was known as a family man and would do anything for his family. Eugene loved spending time with his grandchildren and attending their sporting events as they grew up. He was an avid sports fan and rooted for The Cincinnati Reds, Cincinnati Bengals, and The Ohio State Buckeyes. Among other things, Eugene had a passion for going out to eat, some of his favorites were Bob Evans and Der Dutchman. He enjoyed gardening and grew many of his own vegetables. Eugene will be greatly missed by his children, Susi (Fred) Rinehart, Sandy (Tom) Frazier, and Jeff Hutchison; grandchildren, Heather VanMeter and Nathan, Sara (A.J. Teramana) Oakes, Tina (Andy) Breece, Julie (Doug) Cummins, Theresa (Ray) Martin, Jennie (Austin) Wyatt, Jason (Genna) Hutchison, Jessy (Tony) Villa-Cruz, Andrew (Kristy) Dunaway, Erin (David) Hatcher, and Jennifer (Wade) Johnston. Funeral Services will be private. A live stream of the service will be available on Saturday, November 21, 2020 at 10:55AM. In lieu of flowers, donations in Eugene's name may be made to Capital City Hospice at: https://capitalcityhospice.com/donate This webcast will take place on Saturday, November 21, 2020 at 10:55 AM. Watch webcast for Eugene Hutchison: https://webcasts.lifetributes.com/1102239

Eugene Hutchison, 93, of Columbus, passed away on November 16, 2020. He was born in Columbus on March 27, 1927 to the late James and Madeline (Drake) Hutchison. In addition to his parents, Eugene was preceded in death by his loving wife, Dorothy... View Obituary & Service Information

The family of Eugene Hutchison created this Life Tributes page to make it easy to share your memories.

Send flowers to the Hutchison family.