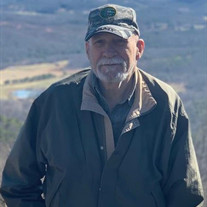 Ernest "Roger" Petty passed away on Thursday, February 18, 2021 at his daughter's home in Ohio and under the care of Capital City Hospice. He was a long-time resident of Mooresville, NC. Roger was born in Fort Worth, TX to John Henry Petty and Ruby Louise (Baty) Petty. He spent most of his youth in Moses Lake, Washington, where he enjoyed swimming, fishing, and ice skating on the lake across from his family home. After high school, he joined the U. S. Army and served in Germany. When Roger completed his service in the military, he returned to the USA and soon after, he married and began his family in Charlotte, NC. Roger spent most of his work life with printing companies. He performed typesetting for the printing of telephone books at Carolina Rulist Press in Charlotte, NC. This entailed reading the typeset upside down and backwards while placing it in alphabetical order. When the use of telephone books became less common, he worked for RR Donnelly printing company in Newton, NC. Roger also worked part-time for the Town of Mooresville before retirement. Born on the first day of spring, Roger enjoyed all of nature. He relaxed by working in his yard and taking day trips to admire the beauty in the mountains of the Blue Ridge Parkway. Roger enjoyed driving fast in his favorite cars and singing along to music he enjoyed from the '70's and '80's. He was most joyful spending time with his family, who were the most important people in the world to him. Roger was predeceased by his parents, his sister (Terese Mourey), and his beloved wife of 53 years, Diane (Crow) Petty. Roger is dearly loved and greatly missed by his daughters, Cindy (John) Bender of Lewis Center, OH and Tina Petty (Des Powell) of Statesville, NC. Roger was a fun, protective, and loving grandfather to five grandchildren: Michael Petty of Mooresville, NC; Caleb Powell of Mooresville, NC; Bryanna Bender of Bowling Green, OH; Emily Bender of Troutman, NC; and Alyssa Bender of Lewis Center, OH. He is also survived by his sister, Connie (Warren) Panaccione of Clearwater, FL; sister, Betty (A.K.) Doby of Surfside Beach, SC, and brother, Keith (Cindy) Petty of Rock Hill, SC; and many nieces and nephews. In lieu of flowers, please consider a donation to Capital City Hospice, The Alzheimer's Foundation, or The American Cancer Society. A private family ceremony to honor both Roger and Diane Petty is planned for a future date, with plans to bury their remains together at a veteran's cemetery in Black Mountain, NC.

Ernest "Roger" Petty passed away on Thursday, February 18, 2021 at his daughter's home in Ohio and under the care of Capital City Hospice. He was a long-time resident of Mooresville, NC. Roger was born in Fort Worth, TX to John Henry Petty... View Obituary & Service Information

The family of Ernest Roger Petty created this Life Tributes page to make it easy to share your memories.