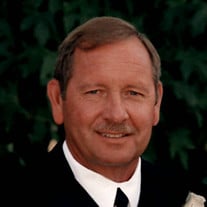 E. Michael Kight, age 71, of Lewis Center, Ohio passed away Friday, December 18, 2020 surrounded by his family. Born May 21, 1949 in Chillicothe, Ohio, to Ernest W. Kight (deceased) and Grace and Herbert Seymour. He was a graduate of Columbus West High School, class of 1967. Mike served in the United States Air Force and retired from the Ohio National Guard at Rickenbacker as a member of the 121st Air Refueling Wing after 38 years as a SMSGT. He was a veteran of the Gulf War, along with multiple other campaigns. Early in his military career, he was proud to serve with the United States Air Force Color Guard. Additionally, he was a proud volunteer with Columbus' annual Red, White and Boom events and took pride in educating school children in flag etiquette and protocols. In his earlier years, Mike was an avid athlete and especially loved wrestling. He enjoyed hunting, home renovation projects, coaching high school girl's softball, collecting coins, visiting casinos, meeting up with his life-long friends for lunch and cheering on the Ohio State Buckeyes to victory. He had every episode of Gunsmoke memorized. Mike had a tremendous sense of humor and was known for playing practical jokes on friends and family members. But most importantly, he was the epitome of a loving girl dad to his four daughters, who adored and cherished him. Mike was preceded in death by his immensely loved and devoted wife of 41 years, Jean Kight (nee Myers), his father's Ernest W. Kight and Herbert Seymour, sister Emma (Bobbie) Casto and his dog Molly. He is survived by his beloved mother, Grace Seymour; daughters, Nicole Kight, Kelly (Eric) Schneider, Natalie (Brent) McCoy and Carrie Kight. His legacy will live on through his grandchildren Jessica and Taylor Hegwood, Austin and Aaron Kight, Joel, Evan and Luke Schneider, Blake, Emmerson and Daxton McCoy, Christian and Mackenzie Bellar and RJ Clark; great-grandchildren, Kayson, Camdyn and Gabriella Holden and Addison Benjamin. Siblings Charles Seymour, John (Mary) Kight, Carolyn Hunter, Sharmin (Dan) Pendell, Ronald (Kim) Seymour, Lisa Seymour, and Gary (Nicole) Seymour and many loving nieces, nephews and dear friends. There will be a Celebration of Life planned at a later date.

E. Michael Kight, age 71, of Lewis Center, Ohio passed away Friday, December 18, 2020 surrounded by his family. Born May 21, 1949 in Chillicothe, Ohio, to Ernest W. Kight (deceased) and Grace and Herbert Seymour. He was a graduate of Columbus... View Obituary & Service Information

The family of Ernest Michael ("Mike") Kight created this Life Tributes page to make it easy to share your memories.

Send flowers to the Kight family.