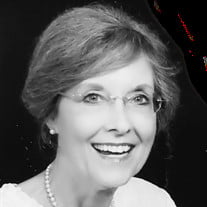 Elizabeth Luedtke Huter, 83, of Westerville, OH, passed away January 5, 2021 at Riverside Methodist Hospital in Columbus, OH. She was born on March 12, 1937, to the late Henrietta (Gaeth) Luedtke and Richard William Luedtke in Toledo, Ohio. Elizabeth was the oldest of four siblings, Mary Lou, Richard, and Suzanne. Elizabeth graduated from DeVilbiss High School in Toledo, Ohio in 1955. She attended The Ohio State University and received her Certificate of Dental Hygiene in 1957. She was a member and president of the Sigma Phi Alpha Sorority. Elizabeth devoted her life to family, arts, and education. Her support of the arts began early, and in 1957 she led the Ohio State University Choir to win First Prize in a choral competition. From 1971 to 2011 Elizabeth was a docent and board member at the Dayton Art Institute. She was a member of the Dayton Philharmonic Orchestra Women's Association and from 1979 to 2011 she served Westminster Presbyterian Church as a Deacon, Session member, teacher, and adult educator. In 1988 she was awarded the Montgomery County Citizens Civic Award. Elizabeth was passionate about education, from being the president of the Centerville PTA, to serving as the Youth Orchestra Chair for Centerville schools. She went on to win many awards - the Centerville Board of Education Award for Promotion of Arts Education, The Central Education Foundation Hall of Fame Award, and the West Ohio Art Education Association Distinguished Citizen Award. After moving to Sarasota, she continued her long-standing dedication to the arts and became an Ambassador for the Ringling Museum of Art. Elizabeth was well known for her elegance and eye for aesthetics. Everything she touched became a stunning creation, from flower arrangements, to table settings, to her beautiful handwriting. Elizabeth loved to laugh and ended nearly every conversation with "Keep Laughing!" Elizabeth will be greatly missed by her children; Timothy (Luanne) Huter, Steven (Claudia) Huter, and Anne (Bharat) Chandra; grandchildren, Mathew (Amanda) Huter, Kate Huter, and Eila and Elyse Chandra. Virtual Service will be held on Saturday, January 16th at 5:00pm via Zoom at the following link https://us02web.zoom.us/j/83163475061?pwd=dWU4SityQzd0REZ0MVdENXY4L09Vdz09 In lieu of flowers, donations in Elizabeth's memory may be made to the Dayton Art Institute

The family of Elizabeth L. Huter created this Life Tributes page to make it easy to share your memories.