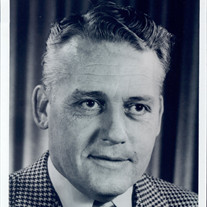 Eldon L. Hall, age 95, passed away Sunday, May 9, 2021 at Inniswood Village. He was born on November 18, 1925 in Columbus, Ohio to the late Edward and Laura Hall. His wife of 71 years, Grace L., preceded him in death on November 20, 2016. He was a devoted husband, father, grandfather, great-grandfather, and brother. Eldon is survived by his sons, Eldon L. (Susan) Hall, Jr., Randall L (Jan) Hall, and Martin L. (Mona) Hall; grandchildren Carey (Jessica) Hall, Andrew (Esther) Hall, Jennifer (James) Gesing, Ryan (Jennifer) Hall, Laura Lee (Kevin) Heppner, and Matthew (Shalyne) Hall; and eight great-grandchildren. Eldon was a 1943 graduate of Gahanna Lincoln High School and a 1958 graduate of Franklin University, where he was Alumnus of the Year and received an honorary doctorate. Eldon was a 50 year member of the Columbus Rotary, a member of the Scottish Rite, and a member of the Aladdin Shrine where he was a member of the band for many years. Eldon served his country in the United States Army during WWII and was stationed in Hawaii, where he was a member of the US Army Ceremonial Band. He was a long-time businessman and was former President and Owner of Rose Products and Services. Eldon was instrumental in the founding of Professional Maintenance of Columbus and Chardon Laboratories. He was a life-long member of Mifflin Presbyterian Church. Eldon was also a member of Worthington Hills Country Club and a former member of the Imperial Country Club of Naples, Florida. He was also an avid OSU Football fan and attended the 1950 Snow Bowl. Visitation will take place on Friday, May 14, at SCHOEDINGER NORTHEAST FUNERAL HOME, 1051 East Johnstown Road, Gahanna, OH 43230 from 12pm-1pm. A private interment will take place at Mifflin Cemetery. In lieu of flowers, please make donations in Eldon's memory to Mifflin Presbyterian Church, 123 Granville Street, Gahanna, OH 43230.

The family of Eldon L. Hall Sr. created this Life Tributes page to make it easy to share your memories.

Send flowers to the Hall family.