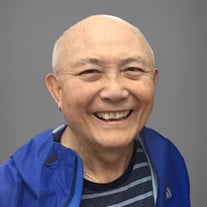 Dr. Eduardo Eden Yu, 78, of Westerville, Ohio passed away Tuesday, August 18, 2020. He was born on September 4, 1941 in Camiguin, Philippines to Vicente and Fulgencia (Romero) Yu. The eighth of twelve children, Eduardo graduated from the University of San Carlos Boys High School, Cebu City, Philippines. He went on to attend The University of Santo Tomas, Manila, Philippines where he was a member of the Tau Mu Sigma Phi Fraternity and earned his medical degree in 1965. Eduardo (Edward) moved to the United States to continue his medical education, where he met the love of his life, Imelda, in Brooklyn, New York. Edward was a radiologist during a time when the field of medicine was rapidly evolving. He loved his work and embraced the changes that modern-day technology presented. Upon completing his residency training in Radiology at The Ohio State University, Edward spent the majority of his medical career as Chairman of the Radiology Department at Mercy Hospital/Knox Community Hospital in Mount Vernon, Ohio. He also served as President of the Knox County Medical Society and was a Paul Harris Fellow Rotarian. Before retiring in 2000, Edward and Imelda, an anesthesiologist, moved to Galion, Ohio where they continued to practice medicine in north central Ohio. Edward was proud of his Chinese and Filipino heritage and strived to carry it on by bringing his family to the Philippines for many vacations. After retirement, he and Imelda continued these trips annually. He was an active member at both St. Vincent de Paul (Mount Vernon) and St. Paul the Apostle (Westerville) Parishes. Being a devout Catholic influenced his world travels and pilgrimages to Fatima, Jerusalem, and many other Holy Cities. Ed loved to share pictures and stories of his trips with family and friends and routinely traveled to his favorite U.S. destinations with visiting family from the Philippines. He enjoyed telling stories of the "old days" and looked forward to reunions of family and friends. An avid golfer and tech enthusiast, Edward also enjoyed playing in the golf league and volunteering to teach computer classes at the Westerville Senior Center. Family was of the utmost importance to Edward. He was often described as the "glue of the family...end to end." He instilled his love of family, a strong work ethic, and the importance of education in his children, Daphne and Tony. He was a proud and devoted Angkong (grandfather) to eight grandchildren and considered them his legacy. His extended family in the Philippines looked up to their "Uncle Eden" as a mentor and patron. The value he placed on education inspired him to sponsor several family members in their pursuits. Uncle Eden's selfless generosity reached far and wide, and it was his hope that those he influenced would ultimately pay it forward. Edward was preceded in death by his parents, Vicente and Fulgencia (Romero) Yu; siblings, Nestor (Corazon) Yu, Concepcion 'Conching' (Antonio) Lua, Consolacion 'Anita' Lim, and Maria Editha 'Edith' (Pedro) Rodriguez; and brother-in-law, Robert Villareal, Sr. He is survived by his loving wife of 53 years Imelda (Lanzanas); children, Daphne (Steven) Suh of Westerville, Ohio and Edward Anthony (Bernadette) Yu of Wadsworth, Ohio; grandchildren, Gregory, David, and Stephanie Suh and Bethany, Brandon, Mackenzie, Jordan, and Paige Yu; siblings, Encarnacion 'Emma' (Quentin) Calagos, Clarita Villareal, Mauricia 'Alice' (Pablo) Tan, Carmen (Ken) Whitney, Generoso 'Henry' Yu, Arsenio 'Ruben' Yu, and Joseph (Mary Ann) Yu; brother-in-law, Lian Hua 'Jimmy' Lim; and numerous cousins, nephews, nieces, and godchildren. Because of the current COVID situation, a private family visitation will be held on Friday, September 4 at Schoedinger Worthington Chapel, 6699 North High Street, Worthington, Ohio 43085. A public Funeral Mass will be held Saturday, September 5 at 11 AM at St. Paul the Apostle Catholic Church, 313 North State Street, Westerville, Ohio 43082. Guests are respectfully asked to wear masks to all events and maintain social distancing. Attendance will be monitored to ensure safety for everyone attending. The Mass will be available to view live on the web utilizing the following links: https://www.facebook.com/stpacc https://www.youtube.com/channel/UC4--7FM5Ih7xtKVYFtuaVJg In lieu of flowers, contributions can be made to St. Paul the Apostle Catholic Church (https://stpaulcatholicchurch.org) or The Alzheimer's Association - Central Ohio Chapter (https://www.alz.org/centralohio).

Dr. Eduardo Eden Yu, 78, of Westerville, Ohio passed away Tuesday, August 18, 2020. He was born on September 4, 1941 in Camiguin, Philippines to Vicente and Fulgencia (Romero) Yu. The eighth of twelve children, Eduardo graduated from the University... View Obituary & Service Information

The family of Edward Yu created this Life Tributes page to make it easy to share your memories.

Send flowers to the Yu family.