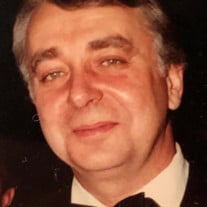 Edward G. Pati, 85, passed away peacefully in Dublin, Ohio, surrounded by his family, on August 26, 2021. Ed was born in Detroit, Michigan on July 8th, 1936. After graduating from Western High School in 1954, he attended the University of Detroit. Ed moved to Central Ohio in 1958 to work for Worthington Industries, a company for which he proudly and loyally worked for over 40 years. Starting out in the plant, he eventually worked his way up to the executive role of Director of Purchasing. Ed was married to his wife of 61 years, Elaine, on December 26th, 1959. An Army veteran, he received basic training at Fort Leonard Wood in the Missouri Ozarks before being stationed in Berlin, Germany. Although raised in Michigan, in time he became a devoted fan of the Ohio State Buckeyes in both football and basketball, though he never wavered in his lifelong support for his hometown Lions, Tigers, and Red Wings. He will be fondly remembered as a loving husband and father, who always put others before himself; he will be dearly missed. Survived by wife Elaine Pati; sisters Irene McNutt and Eleanor Ladany; daughter Kim (John) Curry; son Michael (Suemee) Pati; grandchildren Jennifer (Drew), Kaitlyn, Mackenzie, and Sarah; great grandchildren Madeleine and Summer. Preceded in death by parents Joseph and Elizabeth; brother Joseph. Visitation will be held Friday, September 3rd from 4-7 PM at SCHOEDINGER DUBLIN, 5980 Perimeter Drive, Dublin, Ohio 43017, where services will be held Saturday, September 4th at 11 AM. Interment will follow at Kingwood Memorial Park, 8230 Columbus Pike, Lewis Center, OH 43035. Memorial contributions in Ed's honor can be made to the Dementia Society of America, www.dementiasociety.org . Please visit www.schoedinger.com to share memories and condolences.

Edward G. Pati, 85, passed away peacefully in Dublin, Ohio, surrounded by his family, on August 26, 2021. Ed was born in Detroit, Michigan on July 8th, 1936. After graduating from Western High School in 1954, he attended the University of Detroit.... View Obituary & Service Information

The family of Edward Pati created this Life Tributes page to make it easy to share your memories.

Send flowers to the Pati family.