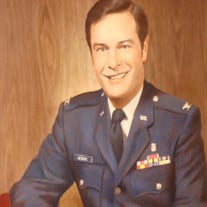 Obituary for Edward L. Menning, Colonel, USAF, VC (retired) Assistant Surgeon General, USAF Edward "Ed" Menning, aged 90, died peacefully on October 25th 2021. Ed was born on a dairy farm in Salem, Ohio, where he developed his passion for taking care of animals. He was a proud alum of Salem High School, and graduated from The Ohio State University in 1955, with a doctor of veterinary medicine degree. That year, he was commissioned as a 1st Lieutenant in the USAF Veterinary Corps. In 1956, he married his college sweetheart, Carol Patterson Menning. Carol and Ed served in the USAF for 26 years. He was base veterinarian at Sheppard AFB, TX, Kindley AFB, Bermuda, and Patrick AFB / Cape Canaveral in Florida. At Cape Canaveral, he was responsible for treating Chimpanzees that went into space, most notably 'Ham', the "space chimpanzee". Ed then attended Univ of Michigan, and earned a post-doctoral degree in public health. He held numerous military positions afterwards, including White House Veterinarian, when stationed in Washington, D.C. Among his many achievements, he was the youngest veterinarian to be promoted to Colonel, the youngest person to be selected as the Corps Chief of the USAF Veterinary Corps, and was selected as a Distinguished Alumni of The Ohio State University. He also earned the AF Distinguished Service Medal, the highest non-combat medal the USAF awards, and the only medical USAF Colonel to whom it was awarded. After retiring from the USAF, Dr. Menning became the CEO of the National Association of Federal Veterinarians. As the principal voice for Federal Public Health issues, he appeared on TV, radio, Voice of America, and was published in all major newspapers in the country. He also testified numerous times at Congressional hearings. Dr. Menning was on the governing council of the American Public Health Association, served in the House of Delegates of the American Veterinary Medical Association for 22 years, was president of the Conference of Public Health Veterinarians as well as the Association of Teachers of Veterinary Public Health, and District of Columbia Veterinary Medical Association. Ed treasured most his loving wife of 46 years, who preceded him in death in 2002, as well as their wonderful children, all of whom survive him: Karen (retired Physician Assistant and Occupation Therapist), Mike (retired USAF Colonel/Hospital Administrator), and Kim (videographer/film producer for US Department of the Interior). Ed's siblings who preceded him in death are his brother Jim Menning and sister Ginny Ferguson. His surviving siblings are his youngest brother Jerry Menning of Salem, and his sister Judith Flading of Canton. Ed and all his siblings are originally from Salem, Ohio. Ed will be remembered most for parties he and his wife hosted, his gardening, talking, playing/teaching bridge, smoking his pipe, and his immediate and extended family, all of whom he loved. He will be buried in Arlington National Cemetery with full military honors, sometime in 2022.

The family of Edward Lee Menning created this Life Tributes page to make it easy to share your memories.

Send flowers to the Menning family.