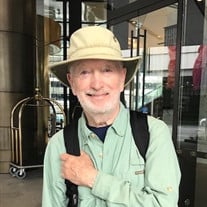 Edward J. Day, 80, of Columbus, Ohio passed away peacefully on Monday, December 28, 2020. He was born on January 22, 1940, in St. Paul, Minnesota to the late Joseph and Grace Day. Ed was a medic in the U.S. Army and graduated from Mankato State University in 1964. He went on to a career working as a stock broker and then held positions in marketing and franchise sales, retiring in 2003. While attending college, Ed met the love of his life, Karen Larson Day, and they enjoyed 48 years of marriage until her passing in 2013. Ed was a dedicated and loving husband and father who always put the needs and interests of his family first. He was fortunate to live a life in which he found much joy and happiness, and he was deeply loved by many. During his retirement, Ed spent time in Lakeside and Columbus, Ohio, as well as Arizona and Florida. He also traveled all over the world with his family members on countless trips, including a four month trip around the globe with his son Joe in 2017 and 2018. When asked earlier this year what advice he would give young people today it was to "always leave a place a little better than how you found it" and "travel the world", both of which he certainly did. Ed was well known for his genuine kindness, wonderful sense of humor, hearty laugh, and for giving the best hugs. He was truly an excellent human being. Ed will be dearly missed by his family and all who knew him, including his daughter Alison Day (Tom Metzger); son Joseph Day; grandchildren Shelby and Ellia Metzger and Quinn Hall; brother Douglas Day; and several siblings in-law, nieces, and nephews who all adored him. He was preceded in death by his parents, his wife, and his sister Roberta Stranahan. ARRANGEMENTS ENTRUSTED TO SCHOEDINGER NORTHEAST. Ed's family has decided to delay holding a memorial service until a date in the future when friends and family can travel and gather safely. Contributions in Ed's memory can be made to Yemen Relief and Reconstruction Foundation (yemenfoundation.org).

Edward J. Day, 80, of Columbus, Ohio passed away peacefully on Monday, December 28, 2020. He was born on January 22, 1940, in St. Paul, Minnesota to the late Joseph and Grace Day. Ed was a medic in the U.S. Army and graduated from Mankato... View Obituary & Service Information

The family of Edward Day created this Life Tributes page to make it easy to share your memories.

Edward J. Day, 80, of Columbus, Ohio passed away peacefully on...

Send flowers to the Day family.