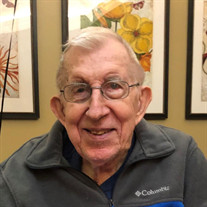 Earl O. Miller, passed away on December 15, 2021 at 6:10 p.m., under the loving care of Whetstone Care Center. On November 8, 1934 he was born in Mitchell, Wisconsin to the late William E. and Dora W. Rosebrock Miller. He also joins his wife, Angie Miller, who passed away January 21, 2009. Earl is survived by his brothers, Carl W. Miller of Indianapolis, IN, Edward E. Miller of Brownsville, TN and Marlin L. (Joy) Miller of Sheboygan, WI, and brother-in-law, Thom Mueller of Sheboygan Falls, WI. He was preceded in death by his sisters Ruth Ciske of Cedar Grove, WI and Martha Mueller of Sheboygan Falls, WI, his brother Richard Miller of Plymouth, WI, sister-in-law, Joan Miller and brother-in-law, Larry Ciske. Earl’s six children are Stan (Lori) Miller, Brian (Karen) Miller, Marilyn (Brent) Wilcox, Susan (Paul) Neaveill, Cheryl (Duane) McClelland and Alan (Lisa) Miller. Earl was blessed with 14 grandchildren (Craig Miller, Aerin Miller, Jacob Miller, Isaiah Miller, Janelle Harting, Evan Wilcox, Hannah Cogswell, Nathan Neaveill, Michael McClelland, James McClelland, Kristin McClelland, Jason McClelland, Skye Miller, Chase Miller), 2 great-grandchildren (Naomi Miller, Bennett Miller), and a host of nephews, nieces and friends. He attended a one-room country school in Wisconsin. In 5th grade Earl got polio which made his left leg a little shorter, but didn’t stop him from reaching his goals. He accepted Christ as his personal savior when he was 17 and chose Matthew 6:33 as his life verse and motivation for his career. “But seek first His kingdom and His righteousness, and all these things will be given to you as well.” He was offered scholarship money to go to engineering school, but instead went to Moody Bible Institute and later to Trinity Seminary where he was taking pictures of the new students and met Angie Miller. They fell in love and got married after graduation. In 1961, along with their year-old son, Stanley, they sailed in a boat for a month to get to the Philippines where they would be missionaries for over 30 years. Earl chose the nickname “Lando” while in the Philippines. They started more than 10 churches in the Philippines and had 3 boys and 3 girls (two of the girls were twins). Late in his missionary career, his wife, Angie contracted a rare lung disease. They retired in California and worked in a church with Filipinos. A few years later they moved to Columbus, Ohio to be near their daughter, Marilyn. Both of them worked at the Lewis Center Wal-Mart for many years (not as greeters, but in the clothing, fabric and craft departments). Earl worshipped at Faith Community Church in Dublin, Ohio, was a member of PASCO (Philippine American Society of Central Ohio) and served as Public Relations Officer for many years for PHILSECO (Philippine Seniors of Columbus). He was also very active in the Forest Park Civic Association on the welcoming committee as a block captain. He was passionate about photography and documenting his family and these organizations. His trademark was passing out tracts with Halloween candy and giving The Daily Bread to neighbors and friends. His last 2 ½ years were spent at Whetstone Assisted Living Care Center where he enjoyed Bingo, reading (his Bible, books and the Columbus Dispatch), listening to the piano man in the dining room, outings with his family, and talking with others. His family will receive friends on Tuesday from 5:00-7:00pm at SCHOEDINGER NORTH, 5554 Karl Road, Columbus, where his Funeral Service will be held at 10:00am, Wednesday, December 22, 2021. Pastor Nick Cannell, retired minister from Faith Community Church in Dublin, Ohio will perform the ceremony. Interment to follow at Northlawn Memory Gardens in Westerville. Contributions may be made to the Earl Miller Memorial Fund and will be designated for Ministry in the Philippines. Write on the check "Earl Miller Memorial Fund". If mailing your gift, send it to: Evangelical Free Church of America, 901 East 78th St., Minneapolis, MN 55420. Earl and Angie had a passion for the Filipino Church where they led many to Christ.

Earl O. Miller, passed away on December 15, 2021 at 6:10 p.m., under the loving care of Whetstone Care Center. On November 8, 1934 he was born in Mitchell, Wisconsin to the late William E. and Dora W. Rosebrock Miller. He also joins his wife,... View Obituary & Service Information

The family of Earl O. Miller created this Life Tributes page to make it easy to share your memories.

Send flowers to the Miller family.