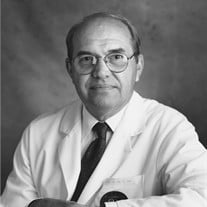 Earl Nelson Metz, M.D., of Worthington, OH, died on Saturday January 2, 2021, in Rhodes Hall of the Ohio State University Medical Center, an institution to which he had dedicated his considerable professional talents for 30 years. He was 85 years old. Dr. Metz was born on January 7, 1935 in Congress, Ohio, to Earl Clarence Metz and Helen Gail Owen Metz. He is preceded in death by his parents; his wife Mary Alice Fritz Metz; and an older sister, Lillian, who died in childhood. He is survived by children Douglas Owen Metz (Ann), Thomas William Metz (David Brightman), Susan Nelson Carter (Eric), and John Frederick Metz (Dianne Little); his brothers, Larry Owen Metz (Mary Jane) and Douglas Elmore Metz (Sue); and nine grandchildren. Dr. Metz graduated from Bexley High School (1953) and Capital University (1957), where he epitomized the term scholar athlete, and where he met the love of his life, Mary Alice. Dr. Metz attended Medical School at Duke University (1957-1961), served his internship at Ohio State University (1961-1962), and returned to Duke for his residency (1962-1963). He continued at Duke as a Fellow in Hematology (1963-1965) and eventually Chief Resident (1965-1966) under Dr. Eugene Stead, a mentor whose lessons in bedside manner guided Dr. Metz's approach to medicine for the entirety of his career. Years later he described Dr. Stead as "a gentle genius who cared, who could make the most humble tobacco farmer in North Carolina believe that he was the most important patient in Duke Hospital." He could have been describing himself. Dr. Metz served as a captain in the United States Army Research Laboratories, Edgewood Arsenal, MD, before returning to Ohio State University in 1968. There he served as a Professor of Medicine until the end of his academic career and held the Charles A. Doan Chair of Medicine from 1972 to 1997. Over the years, he served as Director of the Residency Training Program (1972-1992), Vice-Chair of the Department of Medicine (1977-1997), Chief-of-Staff of the University Hospital (1980-1983), Director of the Division of General Medicine (1985-1986), and Associate Director of Clinical Affairs for The Arthur G. James Cancer Hospital and Research Institute (1990-1997). Dr. Metz was presented with Distinguished Alumni awards from his high school, college, and medical school, and in 2002 he was invited to give the Eugene A. Stead, Jr., M.D. Lecture at Duke University. He was named Master Teacher by the Ohio Chapter of the American College of Physicians. With a national academic reputation, Dr. Metz was respected by his colleagues, admired by his students, and loved by his patients. Dr. Metz's paramount concern was the welfare of his patients, and in a letter to the Annals of Internal Medicine in 2009, he wrote "Being responsible for the primary care of a sick person is one of the finest things we humans are permitted to do. It is rewarding, fulfilling, frightening, time-consuming, and loving." As a professor of medicine he trained between 40 and 50 new doctors each year, preparing successive generations of young practitioners to carry his humane and patient-centered approach to some of the nation's most prestigious medical institutions. He did likewise as director of the internal medicine residency program, which graduated 30 new residents per year. His clinical values were enshrined at the OSU Medical Center in an award that bears his name, the Earl N. Metz Distinguished Physician Award, given annually to the physician who best exemplifies these ideals. In 2009 Dr. Metz wrote, "All of us will die and most of us will die of a degenerative problem for which medicine has little to offer. When that time comes for me, I want to be cared for by a caring physician who left his algorithms in the pocket of his other suit." Dr. Metz was well served in this capacity by the Neurology Critical Care Unit team at the James Hospital and the nursing staff of Hospice of Central Ohio. Although Dr. Metz was an unrepentant workaholic, he gloried in his retirement. "Papa" spent his happiest hours with his grandchildren, sharing with them his love of the outdoors and teaching them about forestry in Hocking County. Dr. Metz was a member of Christ Lutheran Church in Bexley, which he and Mary Alice attended while at Capital University and where he was a member until the end of his life. Due to the pandemic, there will be no visitation or calling hours. A service for family and friends may be announced at a future date, circumstances permitting. Persons wishing to remember Dr. Metz may consider a donation to the "Stefanie Spielman Fund for Breast Cancer Research" at The Ohio State University Comprehensive Cancer Center - James Cancer Hospital and Solove Research Institute. https://cancer.osu.edu/for-donors-and-volunteers/how-to-donate/donate-to-a-special-fund/stefanie-spielman-fund-for-breast-cancer-research

Earl Nelson Metz, M.D., of Worthington, OH, died on Saturday January 2, 2021, in Rhodes Hall of the Ohio State University Medical Center, an institution to which he had dedicated his considerable professional talents for 30 years. He was 85... View Obituary & Service Information

The family of Earl Nelson Metz, M.D. created this Life Tributes page to make it easy to share your memories.