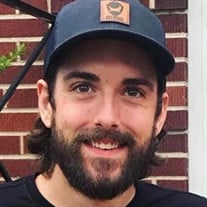 Dylan Meister, 34, of Columbus, passed away on December 19, 2021 at home due to complications from Juvenile Type1 Diabetes. He was born on July 22, 1987, in Columbus OH, to John and Anna (Murtagh) Meister. Dylan is at peace with the Lord in heaven with grandparents Barbara and Robert Murtagh and Robert and Maureen Meister. Dylan is survived by his precious daughter, Nora Meister, who is the light of his life. Everything he did, including buying a beautiful home this year in Clintonville, was for her. Dylan is also survived by the mother of his daughter, friend and former wife Laura Dolle; his proud parents John and Anna; brother and best friend Nick (Emily) Meister; nieces Vivienne and Madeleine Meister; and many loving aunts, uncles, cousins, and many friends, including special friends Wil, Cathy, Bob, Bella, Mia, Katie, Travis, Tyson, Adam and Glenn. Dylan graduated from Columbus Alternative High School where he excelled academically and was particularly passionate about writing, which continued at The Ohio State University where he graduated in 2009 with a B.A. in English, minors in Technical Writing and Spanish. He has enjoyed a career as a marketing/pharmaceuticals copywriter with Navicor and the last several years as Principal Copywriter with Root Insurance, or “The Boss of Words”, as he’d say to Nora. Dylan did not hesitate to share his passion for his work there and his love for his Root Family. Dylan recently lamented how he longed to get back to the office with his friends. He was especially proud of his team’s award winning work on their NASCAR driver Bubba Wallace campaign. He had shared that they were “rooted” in social justice. Dylan loved listening to and playing music (Way Yes!). With his drums and keyboards in his “studio”, he and Nora would jam or he’d simply accompany her on the ukulele. He is known for his unique yet wonderful sense of humor, be it with his quick wit, a pun or simply a facial expression, he always knew how to make you smile, laugh and feel better. Dylan loved to cook (and bake Famous Daddy Bread), and run half marathons (“keeping my blood sugar stable was half the trick”). He adored his nieces Vivi & Maddie; he enjoyed skateboarding, doing puzzles, playing video games and shooting hoops with Nora; and loved sailing “Sanity” with his father at ACSA. He and Nora enjoyed many vacations around the country and at one of his favorite places on earth, Crystal Lake, MI. Services are being postponed for safety purposes. A celebration of Dylan’s life will be scheduled with notification in the near future. Please be kind to yourself and each other. In lieu of flowers, contributions may be made to The Juvenile Diabetes Research Foundation (JDRF), www.JDRF.org or If you prefer to make a donation to Nora, you can contribute to her 529 through the website www.ugift529.com using the code is J3Q-X2V.

Dylan Meister, 34, of Columbus, passed away on December 19, 2021 at home due to complications from Juvenile Type1 Diabetes. He was born on July 22, 1987, in Columbus OH, to John and Anna (Murtagh) Meister. Dylan is at peace with the Lord... View Obituary & Service Information

The family of Dylan Meister created this Life Tributes page to make it easy to share your memories.