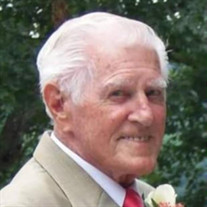 On Sunday, April 18, 2021, Douglas Forbes Morrison, Sr., father of six children, passed away at the age of 91. Douglas was born March 24, 1930 in Bexley, Ohio, to Peter and Helene Morrison. He met the love of his life, Helen Grace Mogan, at... View Obituary & Service Information

The family of Douglas F. Morrison Sr. created this Life Tributes page to make it easy to share your memories.

Send flowers to the Morrison family.