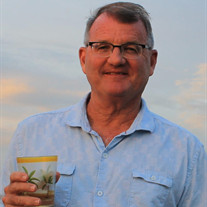 Douglas Michael Kennedy (66) of Dublin, Ohio passed away in the arms of his beloved family on August 14th, 2021 following a swift but valiant battle with Acute Myeloid Leukemia. He was born in Columbus, Ohio on October 11th, 1954 to William (Bill) Linson and Mary Jo Kennedy (Jones). Raised in London, Ohio, "Ace" was a 3-sport letter winner in football, basketball, golf and was first in his high school class. Much to his mother's delight, he attended her alma mater, Ohio Wesleyan University, earning his Bachelor of Arts in Political Science and History. It was at Ohio Wesleyan that he met the love of his life, Candace Caldwell (Candy), on a bench in front of Slocum Hall in 1976. Upon his graduation in 1977, he enrolled in Law School at the University of Toledo, where he obtained his Juris Doctorate and served as Associate Editor of the University of Toledo Law Review. He started his 41 year law career as an Assistant Attorney General at the Ohio Attorney General's Office, followed by joining Lane Alton and Horst as an Associate. It was in 1989 when he found his home as an Associate (later Partner and Shareholder) at Roetzel and Andress, LPA, where he proudly served his clients until his diagnosis. He received numerous recognitions annually, including being named in The Best Lawyers America, Central Ohio's Top Lawyers, and as an Ohio Super Lawyer. On top of his numerous professional accolades, Doug served on the House Committee of the Phi Gamma Delta (FIJI) House at Ohio Wesleyan, as the President of The Athletic Club of Columbus from 2009-2010, and co-chaired the Building Campaign to increase the footprint of the Dublin Community Church, where both of his children were baptized and his daughter married. His greatest joy was being surrounded by his family and friends. Doug and Candy were married on September 20th 1980 in Westfield, Massachusetts. They settled in Dublin, Ohio in 1986 before welcoming their daughter, Kate, in 1987 and son, Conor, in 1989. As an only child, Doug built his family through his friendships from every stage in his life: his many cousins on both the Kennedy and Jones side, friends from St. Patrick's and London High School, his FIJI brothers from OWU, his ACC buddies, the DCHS 2008 football family, his Friday afternoon golf crew, and countless others. Doug was reunited in death with his parents, Bill and Mary Jo. He is survived and will be missed immeasurably by his wife of nearly 41 years, Candy of Dublin, Ohio; daughter Kate and her husband Ryan of Haymarket, Virginia; son Conor and his wife Hannah of Columbus, Ohio; beloved grandson Logan; sister-in-law Sarah; faithful companion, dog Kerry; and three grandpuppies Banner, Carmen and Lily. His family would like to thank the nurses, doctors and staff at The OSU James Cancer Hospital for his incomparable care over the past few months, especially in his final days. The care and compassion provided to Doug and his family was nothing less than extraordinary and they will be eternally grateful. In lieu of flowers, please consider a donation in his memory to the Ohio Wesleyan Fund for a future tribute and the Dublin Community Church UCC. Please ensure that any donations are specified in memory of Doug Kennedy. Family and friends are invited to visit with the family from 5-7pm on Wednesday, August 18th, 2021 at Schoedinger Dublin, 5980 Perimeter Dr. Dublin, Ohio. A celebration of his life will be held at 1:00 pm Thursday, August 19th, 2021 at the Dublin Community Church UCC, 81 W Bridge St, Dublin, Ohio.

Douglas Michael Kennedy (66) of Dublin, Ohio passed away in the arms of his beloved family on August 14th, 2021 following a swift but valiant battle with Acute Myeloid Leukemia. He was born in Columbus, Ohio on October 11th, 1954 to William... View Obituary & Service Information

The family of Douglas M Kennedy created this Life Tributes page to make it easy to share your memories.

Douglas Michael Kennedy (66) of Dublin, Ohio passed away in the...

Send flowers to the Kennedy family.