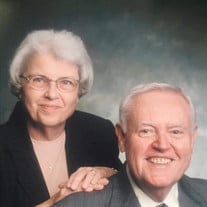 Dorothy Joan (Magley) Ells of Upper Arlington passed away peacefully with family present the morning of August 29 at the age of 89. She was born June 18, 1931 in Angola, Indiana, to the late Harold Wilder Magley and Olive Ivene (Butz) Magley. She was the younger of two girls. Dorothy graduated from Angola High School in 1949 and attended Ft. Wayne International Business College graduating with a two year degree in secretarial skills. She married George A Ells on August 3, 1951 in Auburn, Indiana. They lived a short time in Coldwater, Michigan and later in Burr Oak, Michigan. Dorothy worked for National Carbon Coated out of Sturgis while living in Michigan. In 1956, Dorothy and George moved to Upper Arlington in Columbus, Ohio, starting and running their own sales business for 32 years, Universal Electric Sales Company. Dorothy closed out her career working with her eldest son, daughter-in-law, and husband with Johnstone Supply. Dorothy was a member of the Order of the Eastern Star. She spent many years in various social card playing circles. Dorothy enjoyed fishing, boating, flower gardening, playing bridge, and travelling. She was an excellent cook. She spent 18 years creating irreplaceable family summer memories at a Lake Erie cottage and 14 years of semi-retirement relaxation time at a condo in Arizona. Dorothy was competitive and adept at bowling and putt-putt golf, as many overconfident grandchildren found out. Dorothy was kind, thoughtful, assertive, calm, intelligent, detail minded, and practical. She was a steadying, unflappable presence at home and at work where she was known by some as Grandma Johnstone. Dorothy was preceded in death by her older sister, Betty Jean Magley, and her husband George. She is survived by her four children George (Susan), Karen (Jim), Allen, and DeEtte (Steve), along with 12 grandchildren and 14 great grandchildren. The family wishes to especially thank the kind and loving caregivers that helped Dorothy throughout her final years – Lois, Binty, Brittanae, and Dee. Contributions may be made in Dorothy’s name to the Alzheimer’s Association. Due to Covid-19 the family will be having a private graveside service at Green Lawn Cemetery. Please visit www.schoedinger.com to share memories and condolences. Funeral arrangements entrusted to SCHOEDINGER NORTHWEST CHAPEL.

Dorothy Joan (Magley) Ells of Upper Arlington passed away peacefully with family present the morning of August 29 at the age of 89. She was born June 18, 1931 in Angola, Indiana, to the late Harold Wilder Magley and Olive Ivene (Butz) Magley.... View Obituary & Service Information

The family of Dorothy Joan Ells created this Life Tributes page to make it easy to share your memories.

Send flowers to the Ells family.