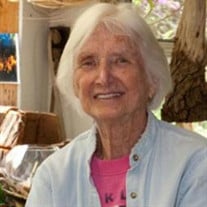 Dorothy's family held a virtual celebration of her life. Please see http://www.dorothygillbarnes.com/celebration-of-life.html to view the recording of that event. Dorothy Gill Barnes, age 93, resident of Worthington, Ohio, passed away peacefully on Monday, November 23, at Riverside Methodist Hospital, after a short battle with COVID-19. Known to some as Ducie or Grandma Dot, she was surrounded by the voices of her loving family at the time of her passing. Dorothy was an internationally recognized fiber artist and sculptor who called the Columbus area home for over 60 years. The third of four sisters, she was born in 1927 in Strawberry Point, Iowa. She showed her creative spirit early by making dolls from paper bags and playing with her younger sister Mary in the asparagus patch. Over the years, she had some interesting chores, including sweeping up in her father’s funeral home/furniture store business and, in the summer, de-tasseling corn. As a teen, she loved going out dancing to big bands. Dorothy studied at Coe College, Minneapolis School of Art, and Cranbrook Academy, as well as at the University of Iowa, where she earned BA and MA degrees in art education. She met Marshall Barnes of Fairfield, Iowa, at Parsons College where they were both teaching. They were married in Manchester, Iowa, in 1952, and made their way to Columbus in 1957 when Marshall joined the music faculty at The Ohio State University. Their family grew, and Dorothy continued to explore a variety of art forms, including ceramics, basketry, and textiles. She spent a year teaching industrial arts at Worthington Junior High School and was an instructor for many years at Capital University in Bexley. She soon began to exhibit basketry and other artworks internationally. As her work evolved, she became widely known for innovative sculpture using natural materials including bark, wood, and stone. She was inspired by the forest and made a point of gathering respectfully, often using trees that were already marked to be thinned from a property. Dorothy taught and participated in residencies and workshops in Denmark, New Zealand, Australia, Fiji, and Canada, as well as throughout the United States. She could often be seen bicycling around Worthington, following the sound of chainsaws to new construction zones, where she harvested beautiful roots and bark from recently cut trees. She could also be found, every Saturday for many years, on the Worthington Village Green with her friends from Central Ohioans for Peace, encouraging drivers to “Honk for Peace” as they passed by. Dorothy had a long history of activism in the civil rights and anti-war movements. She encouraged others to think globally and have empathy for all, regardless of differences. She supported environmental conservation, Honduras Hope, and Habitat for Humanity, where she was a longtime volunteer. When interviewed in 2006 about her participation in protests against the war in Iraq, she stated, “Life is so precious. It is important we find a way to be good and kind to each other.” Dorothy never stopped experimenting and had an enviable supply of creative energy and new ideas, which made her a wonderful mother and friend, as well as a sought-after art instructor and mentor. She enjoyed sharing her reverence for nature and her imaginative spark with her students, often collaborating with or trading pieces with artists who used other media. She continued to work with students as a visiting artist in the glass area of the Department of Art at The Ohio State University until 2018. A Fellow of the American Craft Council, Dorothy received lifetime achievement awards from the National Museum of Women in the Arts and the National Basketry Organization. Other awards include the Raymond J. Hanley Award, Outstanding/Artist Educator from Penland School of Crafts, an Individual Artist Governor’s Award for the Arts in Ohio, and four Ohio Arts Council Individual Artist Fellowships. Her work is in the collections of the Columbus Museum of Art, de Young Museum of the Fine Arts Museums of San Francisco, Mint Museum, Museum of Arts and Design (New York), Racine Art Museum, and the Renwick Gallery of the Smithsonian’s American Art Museum, among others. In Nature, a comprehensive retrospective, was held at the Mansfield Arts Center in 2018. The Ohio Craft Museum hosted From the Woods, a major mid-career survey accompanied by a catalogue in 1999. Dorothy’s work is represented by browngrotta arts in Wilton, Connecticut. She was preceded in death by her husband, Marshall H. Barnes, her parents Gorda J. Gill and Dorothy Moninger Gill, and two of her sisters, Rosalee Huebner and Margaret Van Dyck. She is survived by her children, David (Miki), Gordon (Deborah), Ted (Claudia), and Juliet (Robert Kaeding) Barnes; grandchildren Alison Hamacher, Aaron and Clara Barnes, and Eliza and Eleanor Kaeding; sister Mary Teschner; numerous nieces and nephews, and three great-grandchildren. She loved and was proud of them all. She will also be missed by her many friends, students, colleagues, and devoted helpers and caregivers. Please send inquiries to [email protected] Donations in her memory can be made to The Nature Conservancy (www.nature.org), Sierra Club (www.sierraclub.org), or to a charity of your choice. Dorothy's family held a virtual celebration of her life. Please see http://www.dorothygillbarnes.com/celebration-of-life.html to view the recording of that event.

The family of Dorothy Gill Barnes created this Life Tributes page to make it easy to share your memories.

Dorothy&#39;s family held a virtual celebration of her life. Please...