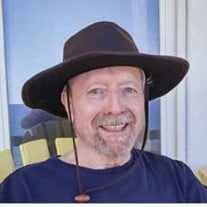 Donald R. (Don) Vorce, Jr. born August 10, 1942 in Worthington, Ohio and passed away November 13, 2020 at Kobacker House in Columbus, Ohio after a lengthy and courageous battle with Parkinson's Disease. He is preceded in death by mother Mae Vorce Jilek, father Don Vorce, Sr., and grandson Donald James Vorce. He is survived by wife of 51 years, Donna and children Russell, Julie and Mitch, all of Columbus. Originally from Worthington, Don was a 1960 Graduate of Upper Arlington High School and went on to Wabash College where he was a member of Phi Gamma Delta fraternity. He played football for Wabash and won an NCAA gold medal in track and field as a javelin thrower. After graduation in 1964, he lived and worked in New York City before returning to Columbus and going into business with his father at Bates and Company. Don was an agent, adviser and friend to clients and eventually retired from Gardiner Allen DeRoberts after many years in the business of insurance. Don was a lifelong athlete, playing golf and excelling in long distance cycling. He completed 12 Tours of the Scioto River Valley (TOSRV) which is a two day, 200 mile round trip ride to Portsmouth. He was a member of the Athletic Club of Columbus, and remained active even into his later years, playing golf with Fore Hope through Ohio Health. Sports were a constant theme for Don - he coached both of his sons in Kiwanis soccer, and was known for both his fairness and competitiveness. He also served as a Board Member of the Touchdown Club in Columbus and was a member of Brookside Country Club. Don loved to fish and spent many happy annual family vacations in the Outer Banks, waist deep in the surf, searching for the elusive big catch. And while dinner may not have come from the day spent on the ocean, you were sure to get a good story or two out of the experience. Don was also passionate about antiques and particularly enjoyed Antiques Road Show. He had several collections of his own that brought him both the thrill and satisfaction of the hunt. The Vorce house served as the home base for virtually all family celebrations including some legendary Thanksgiving post-dinner board games where he would show his dry wit. He loved to laugh, and getting a good joke, one he could pass around, was almost as good as the joke itself. He was lucky enough to claim many decades-long friendships and those were based as much on humor as they were his loyalty and generosity of spirit. In later years, Don participated in multiple philanthropic roles, but his primary focus was the New Life Community Outreach where he served on the committee. He was also actively involved in their service which provides care, clothing and assistance to the homeless community. A longtime member of Trinity United Methodist Church in Marble Cliff, he worked for many other organizations in Columbus to help those in need. In lieu of flowers, and at the request of the family, any donations in his memory may be made to: New Life Community Outreach, 25 W. 5th Avenue Columbus OH 43201, newlifecolumbus.com or Boxer Luv Rescue, PO Box 47777, Phoenix AZ 85068, boxerluv.org. Rev. Amy Aspey will conduct a private family service and burial. A celebration of Don's life will be held at a later date when friends and family can come together to remember this remarkable man. Funeral arrangements entrusted to SCHOEDINGER NORTHWEST. Please visit www.schoedinger.com to share memories and condolences.

Donald R. (Don) Vorce, Jr. born August 10, 1942 in Worthington, Ohio and passed away November 13, 2020 at Kobacker House in Columbus, Ohio after a lengthy and courageous battle with Parkinson's Disease. He is preceded in death by mother Mae... View Obituary & Service Information

The family of Donald R. (Don) Vorce Jr. created this Life Tributes page to make it easy to share your memories.

Send flowers to the Vorce family.