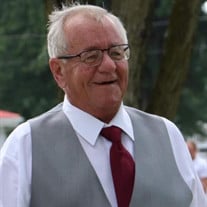 ﻿Donald Kevin Hutchinson went home to be with the Lord on November 26th 2021, in Columbus, Ohio. Don was born September 21st 1957 in Portsmouth, Ohio. Don was a devoted Father to his children and beloved "papa" to his grandchildren. Don joined the Marine Corps in 1972 and after completing his training at Parris Island served across the US and in Japan. After completing his service Don went on to work in construction, oil, metal recycling, and eventually owned his own successful trash business, "Buckeye Valley Waste." He enjoyed growing a garden and raising animals with his family. In his last years Don focused on his family spending as much time calling and visiting his family, children, and grandchildren as possible. He is preceded in death by his father James Hutchinson, his brother Mark Hutchinson, and his daughter Jessica Hutchinson. He is survived by his children Emily (Charlie), Wendy (Cody), Donald, Katherine (Drew) and Jacob. His grandchildren Railey, Logan, Rhyana, Taryn, Bentley, and Maverick. He is survived by his Mother Barbara Hutchinson, his sisters Sharon (Stuart) and Karla, and his brothers Jimmy (Diane) and David. A bible verse that Don often quoted, and he strived to live by was John 13:34 "A new commandment I give to you, that you love one another, even as I have loved you, that you also love one another." In going to the cross, Jesus was obeying the Father's commandment (John 10:18). Now He commands His followers to love one another, even as He has loved us." He never knew a stranger and prayed for people wherever he went. As an organ donor his final act was to help someone else. Don had a love for his fellow veterans and the homeless population. If you would like to make any donations in his honor, please consider donating to a veterans organization or giving food to the next homeless person you see. Family will receive friends from 3-6pm Wednesday, December 1, 2021 at Schoedinger Northeast - Gahanna where a service will begin at 6pm; Bud Leskovac of Harlem Road Methodist Church will be performing the funeral service.

&#65279;Donald Kevin Hutchinson went home to be with the Lord on November 26th 2021, in Columbus, Ohio. Don was born September 21st 1957 in Portsmouth, Ohio. Don was a devoted Father to his children and beloved "papa" to his grandchildren. Don... View Obituary & Service Information

The family of Donald "Don" Hutchinson created this Life Tributes page to make it easy to share your memories.

﻿Donald Kevin Hutchinson went home to be with the Lord on November...

Send flowers to the Hutchinson family.