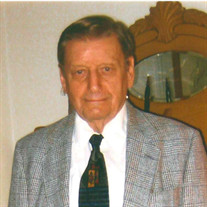 Donald E. Brubaker, age 90, passed away at his home Monday, September 7, 2020, with his loving wife of 38 years, Sherrie, at his side. Don died of complications with bladder cancer and a stroke. Don was the second son of Ralph and Anna Brubaker of Ashland, Ohio. Besides his parents, Don had two brothers, both of whom are also deceased. Leland of Upper Arlington and Gerald of Farmington, Maine. Besides his wife, Sherrie, Don is survived by two nieces: Lisa Esteve (Tomas) of Brownsville, Texas, and one great niece, Sofia and three great nephews: Augstin, Daniel and Carlos and Molly Capuano (Michael) and one great niece, Chloe and two great nephews: Carter and Conner. Don grew up in good Christian family in the 1930s and 40s. He became an Eagle Scout and young businessman when he was still a kid at home. He raised rabbits and puppies and carried newspapers to save money to pay for his first year in college. Don graduated from Ashland High School in 1948 and entered The Ohio State University in the fall of 1948 to study business administration. The Korean War altered his college plans and he left college to serve four years of active duty in the U.S. Air Force as a staff sergeant assigned to special missions in Korea and Japan. After being honorably discharged, Don returned to The Ohio State University on the GI bill to resume his business studies. He graduated in 1956 with a B.S. Degree in Business Administration with a major in marketing. In the 1960s, Don decided to get his real estate license and begin a career which would last 40 years in real estate sales and brokerage. He retired from real estate in 2008 and never looked back. Don thoroughly enjoyed his 12 years of retirement. He joined the UA Senior Center fitness program and took off more than 50 pounds of weight. He enjoyed having time to play more SCRABBLE games with his wife. They had a yearly personal tournament to see who could win the most games. The 2020 tournament ended in January when health issues worsened, but Donald was ahead two games! Those who knew the Brubakers couldn't believe that they logged in at least 600 games each year and that the winner usually only won by one or two games. Don appreciated time to take small road trips to see sights in Ohio he had never seen and also to have time to attend class and family reunions. The family wishes to thank OhioHealth Hospice for their excellent care of Don. He wanted to pass away in his own home and they helped him achieve that goal. Out of respect for Don's wishes, there will be no public services or visitation. Burial will take place at a later date.

Donald E. Brubaker, age 90, passed away at his home Monday, September 7, 2020, with his loving wife of 38 years, Sherrie, at his side. Don died of complications with bladder cancer and a stroke. Don was the second son of Ralph and Anna Brubaker... View Obituary & Service Information

The family of Donald E. Brubaker created this Life Tributes page to make it easy to share your memories.

Send flowers to the Brubaker family.