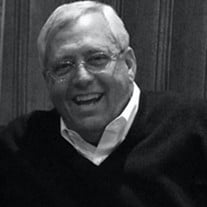 David Boyd Webber, beloved husband, father, son, uncle, neighbor, business partner and friend to countless, died peacefully February 19, 2021, with his loving family by his side. David was born May 21, 1954, to Robert and MaryLou Webber in Mt. Sterling, Ohio and grew up on his family's farm, just outside of town. He was preceded in death by his father and grandparents, Robert and Kathryn Webber and Bruce and Loutie LeMay Junk. He is survived by his devoted and loving wife of 36 years Cynthia (Cindy) Hickey Webber; his children Laura Anne (Annie) Webber and Matthew David Webber; sister Catherine Steinhoff (Wayne) of Manchester, MA; sister-in-law Julie Rapp (Jay); brother-in-law David Hickey (Annemarie); nieces and nephews Webber Steinhoff (Vanessa), Boyd Steinhoff (Jenny), Kate Lu (Ting), Molly Rapp, Katie Rapp, Keeley Andreski (Mike), Sarah Fox (Matt), Reilly Hickey; and grand nieces and nephews Keener Steinhoff, Grace Steinhoff, Mack Steinhoff, Louisa Steinhoff, Gavin Andreski and Oliver Andreski. Friends and family were very important in David's life. They spent time with him and his family over the years at The Webber Family Farm where events, such as fall hayrides, bonfires, pumpkin carving and Beta Brothers' celebrations are legendary and full of memories. They gathered with him fall Saturdays for his renowned tailgate parties at the Horseshoe to cheer on his Ohio State Buckeyes. They watched sunsets; sat on the roof-walk overlooking Sconset on Nantucket; listened to the waves breaking on the beach; enjoyed horse races; played golf, relished happy hour at the Men's Grill; joined him for bourbon on his screened porch; and dined at restaurants nationwide (nod to Patsy's). It goes without saying David never met a stranger. David graduated from Madison Plains High School in 1972 and attended The Ohio State University. He was a member of Beta Theta Pi Fraternity. After graduation from OSU, he began a lifetime career in finance and banking, beginning with a short stint at the Ohio Department of Commerce before returning to Mount Sterling to work with his father at his family's bank, The Sterling State Bank. Later he graduated from the Stonier Graduate School of Banking (ABA) at Rutgers University. Mr. Webber enjoyed a 20-year career with Bank One where he managed multiple commercial functions including the community bank, middle market and national account divisions. He built a community development division, which included low-income tax credit housing, small business development lending and community-based retail distribution techniques. David was also a Senior Vice President in charge of national indirect consumer lending programs. He served as a member of The Banc One Capital Investment Committee, was on the board of Banc One Insurance Corporation and The Private Banking Council. In 1999 Mr. Webber became one of the founding partners and a board member of Stonehenge Capital Company, where he was chairman of the firm's investment committee. He also served as the managing director in charge of Stonehenge's small business investment program, which invests in small and disadvantaged businesses. David's distinguished finance and banking career led to appointments on numerous financial boards, including advisory board member on Topmark Capital, Bluehenge Capital, American South Real Estate Fund and Lakeview Growth Equity Fund. He was a founding member and board member of Heelstone Energy Holdings, a renewable energy developer and operator. He was instrumental in the formation of the National Urban League's Urban Entrepreneur Partnership. Mr. Webber established multiple scholarships through OSU for the I Know I Can Scholars' Program for Columbus City School students. David will be remembered for his strong leadership, business savvy, banking brilliance and financial acumen in the business world. He was philanthropic and known for his larger-than-life personality, hearty infectious laugh, engaging smile, keen wit, and kindheartedness. He leaves us with enough memories to last a lifetime. In lieu of donations to a specific cause, do an act of kindness for someone in memory of David. A celebration of life to honor David will be held in the spring. Family has entrusted SCHOEDINGER NORTHWEST with final arrangements.

David Boyd Webber, beloved husband, father, son, uncle, neighbor, business partner and friend to countless, died peacefully February 19, 2021, with his loving family by his side. David was born May 21, 1954, to Robert and MaryLou Webber in... View Obituary & Service Information

The family of David B. Webber created this Life Tributes page to make it easy to share your memories.

Send flowers to the Webber family.