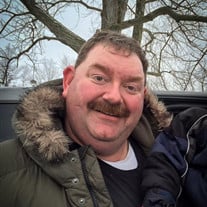 David William Sullenberger passed away on Saturday, January 8, 2022 in Hilliard, Ohio after a valiant year-long fight against pancreatic cancer. He was born April 12, 1970 in Springfield, Ohio and moved shortly after his birth to Williamsport, Ohio, where he lived through his childhood. He settled with his wife and children in Hilliard, Ohio, where he lived the remainder of his life. David will be greatly missed by his wife of 29 years, Susan A. (Carlson) Sullenberger, his two children Kraig L. Carlson (Brittani) of Columbus and Kristine D. Ferriman (David) of Miamisburg, parents Lawrence H. and Sheila C. Sullenberger of Circleville, siblings Dale L. Sullenberger (Connie) of Williamsport, Daniel W. Sullenberger, and Jean E. Sullenberger, both of Circleville, seven grandchildren, and nephew Nathaniel Sullenberger, as well as many other extended family and friends. David was a 1988 graduate of Westfall High school and studied at Wilmington College before quickly moving on into heavy machinery support, first as a mechanic, then a technical representative, and later a trainer at EpiRoc, U.S.A. David was an avid outdoorsman, and found much joy in sharing that love with everyone around him. He was a lifetime Scout and held many leadership roles with the Boy Scouts of America, Troop 349 and Simon Kenton Council. He received his Wood Badge and served as Staff for many years. He also completed both the elite Mountainman and Frontiersman achievements. He was awarded the Silver Beaver in 2012 for his distinguished service in Scouting. David volunteered his time and energy in many arenas; including the American Red Cross Central-Southeast Region on the First Aid Services Team and Emergency Response, and as a member of The Church of Jesus Christ of Latter-Day Saints. One of his greatest joys was sharing his love of life and outdoor activities with children, and especially with his grandchildren. David was a mountain of a man unlike any other. He lived a life full of great adventures. His unwavering faith, and his love and care for all in his sphere were unsurpassed. Family will receive friends from 2-6 PM on Sunday, January 16, 2022 at SCHOEDINGER NORTHWEST, 1740 Zollinger Road, Upper Arlington, Ohio 43221, followed by a Masonic Service at 6pm. Funeral Service will be held at 11 AM on Monday, January 17, 2022 at The Church of Jesus Christ of Latter-day Saints, 1001 Doherty Road, Galloway, Ohio 43119. Interment to follow at Wesley Chapel Cemetery. Memorial contributions may be made to Pancreatic Cancer Research Fund at the Arthur G James Cancer Research Hospital. https://www.giveto.osu.edu/makeagift/OnlineGivingDonation.aspx?Source_Code=DEV_AG-MED_CHRI-JamesWeb-ON-S&Fund=312980.

David William Sullenberger passed away on Saturday, January 8, 2022 in Hilliard, Ohio after a valiant year-long fight against pancreatic cancer. He was born April 12, 1970 in Springfield, Ohio and moved shortly after his birth to Williamsport,... View Obituary & Service Information

The family of David W. Sullenberger created this Life Tributes page to make it easy to share your memories.

Send flowers to the Sullenberger family.