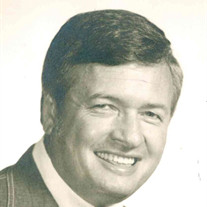 Watch webcast for David James Keating: https://webcasts.lifetributes.com/1095450 David James Keating, devoted and loving husband, father and grandfather, passed away on October 10, 2020 at the age of 91. He was born on January 18, 1929 in Aldan, PA to the late James and Isabella Keating. He attended Aldan schools and graduated from Upper Darby High School. He then attended Wheaton College graduating in 1951 with a Bachelor's Degree in Geology, while playing football and lettering in soccer. After graduation, David attended Officer Candidate School in San Antonio, Texas. He served proudly in the United States Air Force during the Korean War. David worked for 30 years with the oil and gas division of Dow Chemical (Dowell), working in eight different states before his retirement in 1984 as a Regional Sales Manager. After retirement he taught First Aid and CPR for the American Red Cross for 10 years. David was an Eagle Scout, past president of the Mt. Carmel, IL school board, past president of the Mt. Carmel Kiwanis Club, member of the Oil and Gas Association and the Westerville Community United Church of Christ. David enjoyed playing golf, camping, vacationing at the Jersey Shore, and being an avid Buckeye fan. David is survived by his wife of 69 years, Ellyn (VanVlaanderen) Keating; son, Van Keating (Laura) and daughter, Dana Keating-Marziale (Arthur); grandson, Cameron West (Bethany); great grandchildren, Cameron and Isabelle West; and sister Dorothy Kern of Lancaster, PA. Family will receive friends from 11:00 - 12:30 pm, Thursday, October 15, 2020 at SCHOEDINGER NORTHEAST, 1051 E Johnstown Rd, Gahanna with a funeral service to follow at 12:30 pm. In lieu of flowers, donations may be made to the Red Cross or Samaritan's Purse, www.samaritanspurse.org

Watch webcast for David James Keating: https://webcasts.lifetributes.com/1095450 David James Keating, devoted and loving husband, father and grandfather, passed away on October 10, 2020 at the age of 91. He was born on January 18, 1929 in... View Obituary & Service Information

The family of David Keating created this Life Tributes page to make it easy to share your memories.

Send flowers to the Keating family.