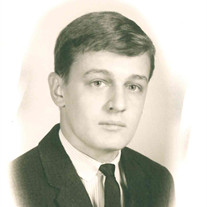 David Grote, 74, of Chillicothe, passed away on July 20, 2021. He was born on August 1, 1946, in Columbus to the late Lawrence and Martha (Collin) Grote. In addition to his parents, David was preceded in death by his aunt and uncle, Cliff and Anne (Collin) Kumler. He attended St. Agatha grade school and graduated from St. Thomas Aquinas High School. Following high school David enlisted in the US Navy where he honorably served his county. Following his career in the Navy he attended Franklin University and the Ohio State University, ultimately graduating from Franklin University with a bachelor's degree in accounting. David had a long working career. He retired from Centrus Energy in Piketon Ohio, where he was a staff consultant and liaison between the government and the company. In David's free time he had many interests. He enjoyed spending time with his family and some favorite memories were travelling and spending time with the family in Florida and Washington state. He enjoyed playing golf and watching football and baseball, including the Cleveland Browns, Ohio State Buckeyes, and the Cincinnati Reds. He loved to fish and he especially loved a good steak. In addition to his interests, David volunteered for many organizations. He was an active volunteer for Zoofari for many years, coached youth baseball, was a past President of King's Athletic Network, was part of the chain gang at King's High School, and was a member of the Chillicothe Athletic Club. He also made a great Santa Clause at many events. David will be greatly missed by his wife of 45 years, Mary Grote; children, Samuel (partner Katie Tuttle) Grote, Brian Grote, Sally Grote, Timothy (fiancé Sara Boettcher) Grote; grandchildren, Daniel Pietrantano Jr., Elijah Grote-Mwilitsa, and Jackson Pickerrell; siblings, William (Sue) Grote and Patricia (Larry) Carollo; and his special four-legged friends, Zoey, Junior, and Rocky. A Memorial Service celebrating David's life will be held on Friday, August 6, 2021, at 11AM at the Schoedinger Worthington Funeral Home, 6699 North High St., Worthington OH, 43085. A visitation will be held on Friday, August 6, 2021, from 10AM until the time of the service. The family would like to say a special thank you to the staff at First Community Village for the loving care that he received. In lieu of flowers, donations in David's name may be made to Sierra's Haven no kill animal shelter, 80 Easter Drive, Portsmouth OH, 45662.

David Grote, 74, of Chillicothe, passed away on July 20, 2021. He was born on August 1, 1946, in Columbus to the late Lawrence and Martha (Collin) Grote. In addition to his parents, David was preceded in death by his aunt and uncle, Cliff and... View Obituary & Service Information

The family of David Grote created this Life Tributes page to make it easy to share your memories.

Send flowers to the Grote family.