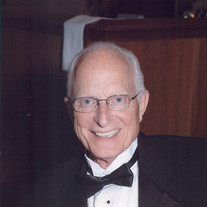 David Albee Campbell, 85, of Powell, passed away peacefully on February 19th, 2021 surrounded by his family. He was born in Detroit MI, on October 7th, 1935 to the late Ross and Elizabeth (Albee) Campbell. In addition to his parents, David was preceded in death by his brother, Steve (Joyce) Campbell and his step-father, Richard Young. Dave graduated from Seaholm High School in Birmingham, MI and Michigan State University with a degree in Urban Planning and proudly served in the US Army Reserves. He spent his career as a custom kitchen designer in Traverse City, MI. He also owned a recording studio, Multi-Media, and was a founding member of The Back Room Gang, where he played a mean banjo and could out sing anybody else in the room. The BRG was known for its rapid paced, fun repertoire of Dixieland and traditional audience favorites, and crowds are still being entertained to this day. The band's longest running gig was at Dill's Olde Towne Saloon. He also was instrumental in helping to secure a permanent home for the Old Town Playhouse and was featured in many musicals throughout his years there. Moving to Columbus, Ohio in 1984, he married his wife, Anne, where they shared a love of music and theater for their 38 years that they were together. Dave started the band the Steamboat Syncopators and produced traditional jazz festivals in both Traverse City and Columbus. His greatest love was his family, and he was never happier than when he was surrounded by them and telling a joke or illustrating his humor through his story telling. He never met a stranger, and you would know Dave was in the room when you heard his infectious laugh. Dave will be greatly missed by his loving wife, Anne Johnson; children, Amy Hutchinson and Jill (Rick) Banghoff; grandchildren John (Danielle) Banghoff and Katie (Mitchell Belle) Banghoff; nieces Laurie (Paul) Walters, Heather (KC) Ryan and Lynne Gillespie; and many extended family and friends. A memorial service celebrating David's life will be held on Saturday, March 6th, 2021 at 11 a.m. at Liberty Presbyterian Church, 7080 Olentangy River Rd., Delaware, OH 43015. A visitation will be held from 10 a.m. until the time of the service. Interment will take place at a later date. In lieu of flowers, donations in Dave's memory may be made to Columbus Cocker Rescue or Liberty Presbyterian Church.

David Albee Campbell, 85, of Powell, passed away peacefully on February 19th, 2021 surrounded by his family. He was born in Detroit MI, on October 7th, 1935 to the late Ross and Elizabeth (Albee) Campbell. In addition to his parents, David was... View Obituary & Service Information

The family of David Campbell created this Life Tributes page to make it easy to share your memories.

David Albee Campbell, 85, of Powell, passed away peacefully on...

Send flowers to the Campbell family.