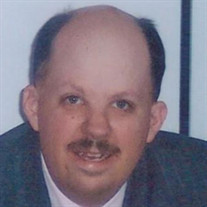 David P. Bamford, 51, born in Toledo, Ohio, passed away peacefully with family at his side on Wednesday, October 7th, 2020 from heart complications. David has touched many lives throughout his young years in Toledo, starting with his education at Altar Elementary, becoming an acolyte at St. Mary Magdalene Catholic Church, and learning masonry at Waite High School. David became active within the community working at several fast food restaurants and then starting a long career at Kroger’s. His love for sports led him to participate in Special Olympics where he played bocce ball and softball. In the late 1990’s, David moved to Columbus, Ohio and flourished even more. With the help of the Delaware County Board of Developmental Disabilities, David found lasting friendships, new interests and talents, and met his fiancé, Melissa. David enjoyed working at Kroger here, but became more adventurous when he tried his had at working for Ohio Wesleyan University in the lunchroom, working for the Alpha Group learning all sorts of hands on skills, and most recently trying his hand at art with Creative Foundations. David took much pride in being an usher and greeter at St. Joan of Arc Catholic Church and enjoyed helping with the parish picnic. He continued his participation in sports by joining the Worthington Bowling league and spending time with Carlo at the Clippers games. He very much enjoyed watching OSU football and following the Green Bay Packers, the Cincinnati Reds, and the Jacksonville Jaguars. Some of his favorite things to do were attending overnight camp with Recreation Unlimited, going downtown to watch plays and shows, mini golf dates with Melissa, and his new found love of cooking when he joined a cooking club. David thrived being around people and would take every opportunity to be out and about. David loved his family and remained close to us all after the passing of Lisa and Mom…his phone calls to check in to say hello and find out what was going on and he never hung up the phone without an “I love you…tell the girls Uncle David sends his love. Make sure to give them hugs and kisses from me.” He was funny, stubborn, and had the biggest heart. He loved ramen noodles and mountain dew more than anybody I know and his appreciation for movies is amazing…he has quite the eclectic collection. He enjoyed all kinds of music, but nothing could beat his two favorites…Michael Jackson and Elvis Presley. The family will have visitation at Schoedinger Funeral Home in Worthington on Sunday, October 11th, from 2-4pm and then travel to Toledo to have a visitation on Tuesday, October 13th, from 10-12 at Sujkowski-Walker Funeral Home in Rossford, Ohio with a funeral service and burial immediately following. In lieu of flowers, the family asks you to consider making a donation to the American Heart Association or to Creative Foundations Delaware, 57 N. Sandusky Street, Delaware, Ohio 43015.

David P. Bamford, 51, born in Toledo, Ohio, passed away peacefully with family at his side on Wednesday, October 7th, 2020 from heart complications. David has touched many lives throughout his young years in Toledo, starting with his education... View Obituary & Service Information

The family of David Paul Bamford created this Life Tributes page to make it easy to share your memories.

Send flowers to the Bamford family.