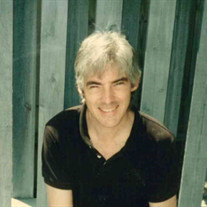 Daniel (Dan) Broaddus, 61, of Lexington, Ohio, passed away at OSU Wexner Medical Center with family by his side on July 3, 2021, after a sudden illness. He was born on January 1, 1960, in Gainesville, Florida to the late Charles and Ruth (Banister) Broaddus. Dan was a 1978 graduate of Greenhills High School in Cincinnati, Ohio. He attended the Ohio State University in Columbus from 1978 to 1982. It was there that he met his beloved wife, Robin, and they were married at Indianola Presbyterian Church on August 31, 1985. Dan was employed within the field of landscaping until his retirement. After his retirement, Dan enjoyed caring for his daughters, Katie and Ellie, attending their sporting events, gardening, computer gaming, motorcycle and Miata road trips with his wife, watching favorite movies and television, and a good bull market. Dan was known for his conservative nature, favorite Levi's jeans, and plain or black clothing. He will be remembered by many as a quiet, gentle man that enjoyed the comfort and familiarity of his home, family, and close friends. He showed exceptional love and kindness for his wife, daughters, granddaughters, pets, and animals of all kinds. However, Dan will be most remembered by many for his fun-loving spirit and keen sense of humor. Throughout his life, Dan had created his own unique and humorous names for things, as well as for almost every person he came to know. Dan will be greatly missed by his loving wife, Robin; daughters, Katherine (Nicholas) Lewis and Elisabeth (Matthew White) Broaddus; granddaughters, Esther and Edie Lewis, and soon to be granddaughter Valarie White; siblings, Michael (Colleen) Broaddus and Elizabeth (Bruce) Maybriar; and many nieces, nephews, close family friends, and cats, Cody and Avery. Dan will be laid to rest at Resurrection Cemetery in Lewis Center, Ohio. A private Memorial Service and Celebration of his life will be held later at Schoedinger Funeral Service of Worthington. In lieu of flowers, donations in Daniel's name may be made to any animal welfare or children's organization.

Daniel (Dan) Broaddus, 61, of Lexington, Ohio, passed away at OSU Wexner Medical Center with family by his side on July 3, 2021, after a sudden illness. He was born on January 1, 1960, in Gainesville, Florida to the late Charles and Ruth (Banister)... View Obituary & Service Information

The family of Daniel Broaddus created this Life Tributes page to make it easy to share your memories.

Send flowers to the Broaddus family.