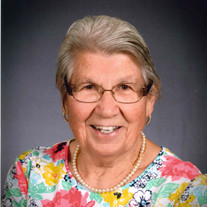 Danica Bolcevic passed away October 31, 2021 at age 92. Born in 1929 in Yugoslavia (now Croatia), she grew up working on her family's vineyard and later on a family farm. In 1947 Danica married Ivan Bolcevic; Ivan came to the U.S. and settled in Cleveland, OH, and in 1961 Danica and her children joined him. She and Ivan worked in factories until they could afford their own home, and years later they purchased a dairy farm near Jefferson, Ohio. In 1989 Danica and her husband moved to Columbus, Ohio, and Danica transformed their backyard into a large vegetable garden. That work wasn't enough for her, though, so at age 70 she got a job at Niki's Deli and later worked for catering businesses. She was always a hard worker who would do anything for her family. Her last move was to her daughter, Jeannie Haskakis, and son-in-law, Nick's house in 2016. Later a friend, Larry, joined the household. Danica and Larry would play Mexican Train for hours at a time. They would make up their own rules and Danica usually won. Danica also became part of two other "families" in Columbus: one was a group of friends from the Karl Road YMCA water aerobics class led by Lori, who met to celebrate each other's birthdays; the other group included close friends Wilming, John, Deb, and Jan. She greatly enjoyed meals with members of both groups. And through her decades in the United States she was sustained by her continued friendship with Francis Petrich, whom she met in a factory sixty years ago; Danica would become godmother to Francis's sons, Jackie and Tony, who became extensions of the family. Danica was preceded in death by her husband, Ivan, and son, Steve Bolcevic; sisters Ankica (Gabriel) and Zorica (Ferdo); and brothers Jura (Stonja), Stef (Ilizebeta) and Janko (Katica). She is survived by two daughters, Jeannie Haskakis (Nick) and Diane Furlong (Ed); brother David (Sonja), sisters Pavlica (Branko) and Slavic (Isador); and grandchildren Stevie, Sherrie, and Shawn Bolcevic. Family will welcome friends 9:15-10am Friday, November 5, 2021 at St. Matthias Church, 1582 Ferris Rd, Columbus, OH 43224 with Mass of Christian burial to follow. Interment to take place at Resurrection Cemetery in Lewis Center. Friends are invited to join the family for a luncheon following the graveside.

Danica Bolcevic passed away October 31, 2021 at age 92. Born in 1929 in Yugoslavia (now Croatia), she grew up working on her family's vineyard and later on a family farm. In 1947 Danica married Ivan Bolcevic; Ivan came to the U.S. and settled... View Obituary & Service Information

The family of Danica Bolcevic created this Life Tributes page to make it easy to share your memories.

Send flowers to the Bolcevic family.