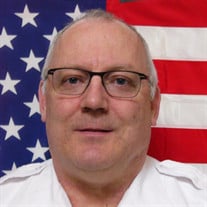 Dale James Thomas, 58, of Columbus, passed away at The James on August 24, 2020, surrounded by his loving family, after an eight-month battle with cancer. Dale was born in Ironton on May 2, 1962 to the late Henry and Margaret “Peggy” (Ryan) Thomas. Dale is survived by his siblings Mark (Karen) Thomas, Scott Thomas, Judy (Troy) Elzey, and Kim (Chuck) McGrothers; nieces and nephews Kari (Jarrett) Wampler, Michelle (fiancé Nate Elam) Thomas, Ashley Thomas, Breanne, Matthew and Maggie McGrothers, and Aiden Elzey; as well as many friends. Dale was a 1980 graduate of Gahanna Lincoln and received his associate degree from Columbus State Community College. He began his career in IT at Chase Bank, before becoming employed with the Columbus Police Department as a 911 dispatcher, eventually finding his way to their IT department. Additionally, he worked as a part time police officer with Sharon Twp. for the last 14 years. He was also a volunteer fire fighter for Mifflin Twp. at one time. He enjoyed bowling and softball, playing on many leagues. Dale was a generous, giving and caring brother and friend to many. Visitation will be held Friday, August 28, 2020 from 2-4 and 6-9PM at SCHOEDINGER NORTHEAST, 1051 E. Johnstown Rd., Gahanna. A Mass of Christian Burial will be observed Saturday at 10AM with Fr. Paul Noble, officiant, at St. John Neumann Catholic Church, 9633 E, OH-37, Sunbury. Interment will follow at Resurrection Cemetery, Lewis Center. Masks will be required at both locations. In lieu of flowers contributions can be made to either The Columbus Police Foundation, 1234 E. Broad St., Columbus 43205-1453 www.columbuspolicefoundation.org or to Sharon Township Police Department c/o Chief Donald E. Schwind, 95 E. Wilson Bridge Rd., Worthington, OH 43085 in Memory of Dale Thomas.

The family of Dale Thomas created this Life Tributes page to make it easy to share your memories.

Dale James Thomas, 58, of Columbus, passed away at The James...

Send flowers to the Thomas family.