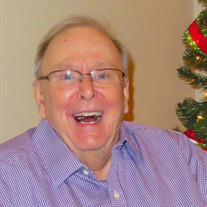 D. Warren McCullough, age 84, passed away on Friday, November 12, 2021 under the care of Danbury Senior Living. He was born in Brazil, Indiana on September 3, 1937 to the late Harry L. and Freida L. (Haeberle) McCullough. Warren graduated from Indiana University, Class of 1959, where he was a member of Alpha Tau Omega Fraternity. He was also active with ROTC and went on to serve as an Officer with the Army Reserves, where he rose to the rank of Major. In 1961 he married his high school and college sweetheart, Susan Jane Cooper in Brazil, Indiana. After his military service Warren began his career in retail, starting as a sporting goods sales manager for Lazarus in Columbus, Ohio. He then worked as a regional sales manager for JoAnn Fabrics before finishing his career as a store manager for TJ Maxx. While his sons were in the High School Marching Band, he and Susan were active Band Booster. He revolutionized fundraising for the band through the selling of school merchandise. He and Susan enjoyed traveling, spending time with friends, and being parents and grandparents. Warren is survived by his children, Mark Cooper (Jill) McCullough, Joseph Riley “J.R.” (Amy) McCullough and Sarah Ann (Kyle) Stevenson; grandchildren, Nicole, Joshua, Alex, Katie, Annalise, Deacon and Alena; sister-in-law, Betty Ann (Louis J.) Roney; niece, Amy Deckard; along with many friends. He is preceded in death by his wife, Susan Jane (Cooper) McCullough, who passed away on July 26, 2016; and his nephew, Louis V. Roney. A devoted husband, dad, granddad and friend. He will be deeply missed by his family and all who knew him. His Memorial Service will be held at 7:00pm, Tuesday, November 23, 2021 at SCHOEDINGER NORTH, 5554 Karl Road, where family will receive friends from 6:00pm to the time of service. Father Antony Varghese, with St. Elizabeth Catholic Church, officiating. A private interment will be held at a later date and warmer weather. Memorial contributions may be made to Donation Processing, The Michael J. Fox Foundation, P.O. Box 5014, Hagerstown, MD 21741-5014 (donate by phone: 1-800-708-7644) michaeljfox.org.

D. Warren McCullough, age 84, passed away on Friday, November 12, 2021 under the care of Danbury Senior Living. He was born in Brazil, Indiana on September 3, 1937 to the late Harry L. and Freida L. (Haeberle) McCullough. Warren graduated... View Obituary & Service Information

The family of D. Warren McCullough created this Life Tributes page to make it easy to share your memories.

Send flowers to the McCullough family.