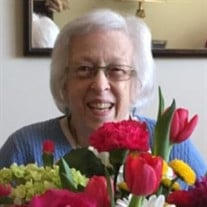 Constance Basch Freundlich, loving wife and mother of two children, passed away from Covid-19 infection at age 86 on Tuesday, December 22, 2020. Connie, born May 12,1934 to Mel and Doc Basch, came from a long line of women who cared about other people and was passionate about social justice and community service. She followed in the footsteps of her grandmother Elizabeth 'Bertie' Freund, a 1900 University of Cincinnati graduate and suffragist, who helped found the League of Women Voters in Toledo which in turn worked toward gaining the vote for women until the 19th Amendment was ratified in 1920. Her great aunt Carrie Simon was a founder of the National Federation of Temple Sisterhoods. Her mother Maryleone was also involved with community service. Connie's family always came first but she spent her spare time helping others and serving in community service. She had a life-saving ileostomy operation in 1960 which then started her service in the United Ostomy Association, a national organization that supports people who have had or will have such as operation and accepted the organizations highest award for service in 1971. She received many other service awards during her lifetime, enjoyed temple activities, and was one of the founding families for temple Beth Shalom in Columbus Ohio. Connie was an avid reader who enjoyed the company of family and friends. She was a sweet and kind mother and grandmother but held very strong convictions and wasn't shy about sharing her opinions. She will be missed but she leaves behind two beautiful families which she was so very proud. She had a life well lived and her memory is a blessing. Constance was born to Lewis and Maryleone (Freund) Basch and preceded in death by her beloved husband Edward, brother Richard Basch, sister in law Sylvia Basch, brother in law Jerry Freundlich, sister in law Ruth Rubenstein, and grandson Nathan Douglas Richeson. She is survived by Douglas and Cathy (Freundlich) Richeson and Thomas and Sarah Freundlich, grandchildren Joel and Anna Richeson, Joseph and Courtney Freundlich, Anna Freundlich, Grace Freundlich and Chris Bierman, and Lillian Freundlich. Great grandchildren Benjamin and Charlotte Richeson, and Maxine Freundlich. She will also be greatly missed by her sister in law Mary Freundlich, many nieces and nephews, and many friends that to her were as close as family. A private graveside service will be held as well as a celebration of life ceremony to be announced at a later date. In lieu of flowers, donations in Constances's memory can be made to Captain Nathan Douglas Richeson Memorial Scholarship Fund, Ohio University Foundation PO Box 869, Athens Ohio 45701 or Dr. Lewis R Basch and Dr Richard L Basch Memorial Award, The Ohio State University, [email protected] or Temple Beth Shalom 5089 Johnstown Road, New Albany, Ohio 43054 Arrangements entrusted to SCHOEDINGER MIDTOWN, 229 East State Street. To share memories or condolences with the family please go to www.schoedinger.com.

Constance Basch Freundlich, loving wife and mother of two children, passed away from Covid-19 infection at age 86 on Tuesday, December 22, 2020. Connie, born May 12,1934 to Mel and Doc Basch, came from a long line of women who cared about other... View Obituary & Service Information

The family of Constance Basch Freundlich created this Life Tributes page to make it easy to share your memories.

Send flowers to the Freundlich family.