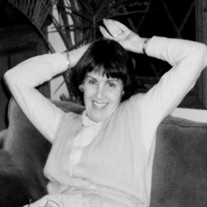 This webcast will take place on Friday, October 16, 2020 at 2:00 PM. EST Watch webcast for Constance “Connie” Dehlendorf: https://webcasts.lifetributes.com/1095661 Constance (Connie) Crabbe Dehlendorf passed away October 7, 2020 at age 82. She was born October 27, 1937 to John Roth Crabbe and Eleanor Hommon Crabbe. In addition to her parents, she was preceded in death by her husband Michael A.Dehlendorf and her brother Benjamin Roth Crabbe. She is survived by her daughter Laura Dehlendorf (Jim Crane), son Michael Dehlendorf, and son Matthew Dehlendorf (Traci). Connie is also survived by four grandsons; Cole (who just graduated from Parsons School of Art and Design), Roth (who just graduated from Miami University), Gabe (an OSU junior ) and Sasha (in 7th grade at Jones High School). Connie grew up in Bexley and graduated from Columbus School for Girls, and attended Middlebury College and the University of Vermont. She met her husband Mike at Middlebury and they married in 1958. Upon graduation Mike became employed by Humble Oil in Burlington, Vermont, where they lived for two years and welcomed Laura. Mike was then offered jobs in Chicago and Columbus, so they chose Columbus where Connie's parents lived. She was co-owner of Cookies From Mom, a member of the Junior League of Columbus, Twig 61 and 88 of Nationwide Children's Hospital, the Childhood League and Women's Board of the Columbus Museum of Art, Bexley United Methodist Church, Jefferson Golf and Country Club and Wedgewood County Club. Past member of the Columbus Country Club and The Athletic Club. Special thanks to her caregivers of 3 years , Golden Harts (Debbie and Ashley), and to her caregivers for the past 4 weeks, The Hay Group (Teresa, Charlene, Chrissie, Kristina, Melissa and Rachel). A limited private funeral service by invitation only (due to covid restrictions) will be held at Schoedinger Northeast, 1051 E. Johnstown Rd. Gahanna, OH 43230 on Friday, October 16, 2020 at 2:00 PM. Drive through calling hours are open to the public from 2:45 to 4:00. Private interment. Donations in Connie's memory may be made to Cat Welfare www.catwelfareassoc.org and the Ohio Wildlife Center www.ohiowildlifecenter.org .

The family of Constance "Connie" Dehlendorf created this Life Tributes page to make it easy to share your memories.

Send flowers to the Dehlendorf family.